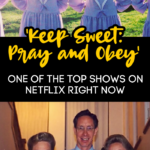 This story is just crazy.

Remember Warren Jeffs? He was in the news quite a few years back, because — well — he’s pretty much evil.

Warren Jeffs ran The Fundamentalist Church of Jesus Christ of Latter-Day Saints, which is an offshoot of Mormonism.

Keep Sweet: Pray and Obey is about that group of believers — the believers in Warren Jeffs.

It is important to note that The Fundamentalist Church of Jesus Christ of Latter-Day Saints is NOT Mormonism, it’s a kind of warped version of their beliefs.

Side Note: You know that show Sister Wives, which is about the Browns — the family of polygamists who had to flee Utah to Las Vegas? They are a sect of The Fundamentalist church.

Warren Jeffs was the ringleader of the FLDS cult-like version of the Mormon church.

I called it “cult-like.” It really was ACTUALLY a cult.

It is so sad that people fall into these cults, and then the kids are raised thinking that this is “normal” life.

Everyone in The Fundamentalist Church of Jesus Christ of Latter-Day Saints thinks Warren Jeffs is a prophet, and the way of life that he teaches — well, before he was arrested — is the way to heaven.

They believe in polygamy. Not just polygamy, but taking young, underage girls as “wives.”

24 of his wives were underage. They were innocent children.

These children were brainwashed to think that this way of life was “normal,” and my heart just breaks for them!

Seriously, watching it will make you just want to lock up your daughters.

They believed that the more wives you had — and the more children that were conceived — the higher your station in heaven would be.

Like, they were actually upset when Warren Jeffs was arrested for sexual assault of a minor, among his quite extensive list of other charges. They thought that the U.S. government had no authority over them, and that Jeffs was completely innocent.

So, this Netflix docuseries is about the events leading up to the arrest of Jeffs, his trial, and the aftermath.

You will be FLOORED when you see the way these people actually lived and celebrated Warren Jeffs.

You can see a trailer for the show HERE.