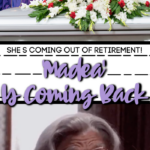 ‘Madea’ fans, it is actually happening!

Tyler Perry is bringing back the character in an all new Netflix film, so get ready!

This will be the 12th in the film franchise and is called ‘A Madea Homecoming’ that will only be on Netflix.

The new movie will be filmed at Tyler Perry Studios in Atlanta, Georgia.

I feel like everyone has to know the ‘Madea’ character right?

‘Madea’ was first introduced in a play called ‘I Can Do Bad All By Myself’ back in 1999 and just exploded from there in movies, television, other theater shows, and even a book.

Back in 2019, Tyler Perry had mentioned retiring his ‘Madea’ character after the release of ‘A Madea Family Funeral’.

I don’t want to be her age playing her, so it was time to shut it down and move on. I’ve got some other things I want to do, and in this next 50, I’m going to do something different.

I guess the people spoke and he changed his mind to give old ‘Madea’ one more go!

The ‘Madea’ franchise includes 11 movies and 20 plays that have grossed over $1 billion at the North American box office, that’s a lot of $$!

The new film will be written and directed by Tyler Perry with Michelle Sneed executive producing with him.

‘A Madea Homecoming’ is aiming for a 2022 release on Netflix!