Believe me when I say that I never thought the words “I own a hedgehog” would EVER come out of my mouth and I am still shocked. My husband has wanted one for years and when we went to visit my sister-in-law, to my surprise, she had two hedgehogs and the female was pregnant. I rejected the idea of a rodent in my house, especially when we already have four animals (all of which could kill it). The thing with my husband is he is the most stubborn human being alive and he no matter how many times you tell him “No”, he will keep asking you. Eventually I was sick of hearing him beg and whine like a child so I caved and said “Yes.” So now I have a hedgehog, an animal I never wanted. 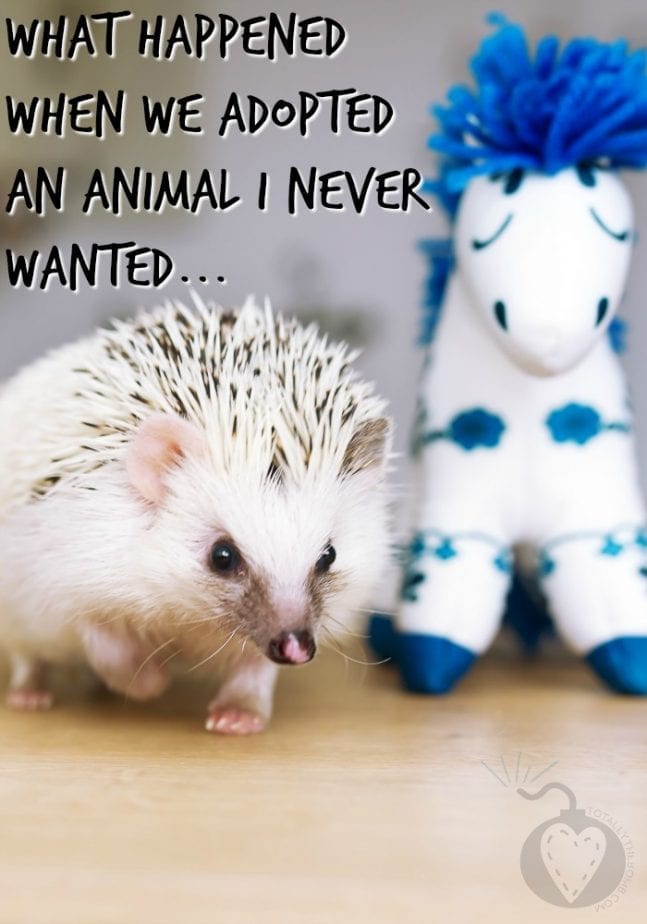 What Happened When We Adopted An Animal I Never Wanted…

I figured I’d leave all the cleanup, all the care, all the nurturing to my husband and this would be his pet and I wouldn’t have to have anything to do with it.The problem with my plan is that it backfired; I have now grown attached to the hedgehog. When we first brought her home, she cuddled in the crook of my armpit where it was the darkest and where she felt the safest. She burrowed herself in there and didn’t emerge for almost 20 minutes and within that time frame, I became attached. I mean her quills do hurt, especially when you startle her and she puffs them out. They hurt like a bitch and it takes her a while to calm down, especially considering she was moved from her home, her siblings, and her mom. Once she does relax though, you can touch the quills gently without hurting yourself.

Oh by the way, her name is Princess Pokey (yes you read that correctly) and she doesn’t like to be bothered during the day, which I tend to do. We have a tank for her with comfy purple bedding, a pink dome where she can hide, a purple wheel, a water bottle, her food, a salt lick, and her litter box. She is all set up in our spare room and so far she has not eaten anything. Apparently being removed from their home can make them lose their appetite for several days. Oh, and there was the incident the first night she was in the house where she escaped from her tank and had a tangle with our dogs. But she’s okay, and they’re okay and after my heart started again, I was okay.

I stayed in denial for less than half of the day, before I finally admitted out loud that she had found some way to melt my icy heart and I loved her. I keep thinking over and over how adamant I was about how much I would hate her and that I would NOT interact with her at all. I would leave all responsibilities to my husband since he was the one who wanted the weirdest pet. Now, I love taking her out of her cage even when she gets huffy, puffs her quills out, and curls into a ball (her version of the fetal position) because she is scared or startled. Once she does come out of her ball she loves to sniff my hands and run frantically to the darkest place in the room that she can find.

Almost two weeks later, she is starting to settle into her new home and feel more comfortable in this new place. I do have to say that I am surprised by the connection I felt with her, but even though I was so determined to hate her, I couldn’t help feeling that twinge in my heart. I struggle with opening my heart up because that makes me vulnerable, but that is what is so beautiful about unexpected love is the rush that comes along with it. It’s almost like I felt my heart strings being tugged by this adorable little creature cuddling in the crook of my arm. The funny thing is that I thought she would be another huge responsibility, but she likes to be left alone for the most part, enjoying her exercise wheel.

Every day I go check on her and take her out of her home and wait for her to relax and come out of her ball and just let her run around the bed while I watch her. She is fast and loves to try to burrow herself in the pile of pillows in an attempt to block out all the light. I love watching her run around and I love holding her and letting her sniff my hand and try to run away because she’s an independent woman (just like me, her new mama). Once an owner and a pet bond, the bond is usually one that will last for life and will simply grow stronger as time passes. At this point Princess Pokey and I have bonded and there is no way that she is going anywhere!

P.S.- I know my husband reads all of my blog posts so I will say this only ONCE babe: you were right.