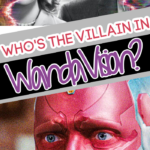 When January 15th finally hit our calendars, Marvel fans with a Disney+ subscription could finally rejoice, as the long-awaited and – as it seems for now – critically-acclaimed series WandaVision finally premiered its first two episodes.

The intention is to air nine episodes until March 5, 2021, which means that we still have a lot of time (and also waiting) to enjoy the show.

So, while there are a lot of (un)answered questions related to the show, WandaVision has, so far, shown us that it contains a true mystery – its villain!

Certainly, a show shouldn’t really reveal all of its cards immediately, but as far as the villain of this show is concerned – we have no clue. There are some theories, and we are going to try to answer the question for you though.

Our article is going to give you a brief introduction to the show that is WandaVision, after which we are going to tell you whether we actually know the actual villain of WandaVision or not. When we give you the answer, you’re going to find out either who the villain is or who he might be. We prepared a lot of interesting information for you, so be sure to read all of it!

WandaVision is an American television miniseries about the MCU superheroes Wanda Maximoff, a.k.a. Scarlet Witch, and Vision. The show premiered on January 15, 2021, on Disney+ and is officially a part of the Marvel Cinematic Universe (MCU).

The show stars Elizabeth Olsen as Wanda Maximoff, the superheroine Scarlet Witch, and Paul Bettany as Vision, the computer-turned-superhero that was formerly Tony Stark’s assistant. The narrative is set after Avengers: Endgame and explores a fictive and historical development of Wanda’s and Vision’s marriage throughout the decades, starting with the 1950s; as we know, Vision was killed by Thanos in the main storyline.

Along with them, who are reprising their roles, the show stars Debra Jo Rupp and Fred Melamed as the Harts, Wanda’s and Vision’s neighbors, Kathryn Hahn as Agnes, Teyonah Parris as Monica Rambeau, Kat Dennings as Darcy Lewis, and Randall Park as Agent Jimmy Woo; the latter three also reprise their roles from the MCU, while the first three are new characters.

The miniseries is scheduled to have nine episodes for now. The first two premiered on Disney+ on January 15, 2021, with the third one airing a week later.

Disney+ plans to release a new episode once per week until March 5, 2021, when the show is scheduled to finish. So far, the show has been met with praise from both critics and fans, with special praise directed towards Olsen’s and Bettany’s interpretations.

The big question – who is the real villain of WandaVision?

Now, while the show might pose a lot of questions and contain a lot of mysteries, one of the biggest mysteries so far is the identity of the actual villain of the series.

So far, the series has confirmed the existence of at least four new villains within the MCU, but whether one of them is the actual villain remains to be seen. The villains introduced so far are:

While some of these names have yet to appear in the show, their existence within the MCU is quite clear, thanks to rather obvious references. So, is our main villain on this list, or is it someone else entirely?

We doubt that the producers and writers would use a show with so much potential to make the actual villain be HYDRA or A.I.M. so that we can exclude them from our ideas.

As for the Grim Reaper, he also doesn’t seem to be a likely candidate for the big baddie of this show, which leaves only one candidate, and he is a truly viable one – Mephisto.

Okay, Mephisto has not even been confirmed for the show, why are we listing him as the big baddie? Well, there is an ongoing and quite plausible theory that Mephisto is, in fact, the often-mentioned but as of yet unrevealed Ralph, the husband Agnes often talks about.

Why? Well, first of all, people suspect that Agness might actually be Agatha Harkness (Agatha Harkness), a powerful witch who acted as a mentor to Wanda at one point. The White Rabbit Agnes lends to Wanda is called Señor Scratchy, and Mephisto often used the aliases Nick Scratch or Jack Scratch during his appearances.

Also, the plot involving Wanda and Mephisto included her using shards of Mephisto’s soul to magically become pregnant with Vision, which is basically the plot of WandaVision. So, is it Mephisto? Well, it remains for us to see, but there is enough evidence that points in that direction. Although, there is another theory…

Is Wanda the real villain of WandaVision?

As of episode three, there is another ongoing theory – that Wanda is the actual villain of the series and that she has created (and keeps manipulating) her false reality of coping with the losses she has suffered; seeing how powerful she actually is, creating and manipulating a false reality would not be a problem for her.

Our evidence for this? The strange vibes Wanda’s neighbors and Vision himself emit during episode three, as well as her obvious interventions in the events through time manipulation. Is Wanda the actual villain, or are her interventions just a consequence of Mephisto’s larger plot? As with the former theory, we’ll just have to wait and see, but this is what we know and suspect so far.

And with this, we conclude our analysis of the day. We have introduced you to the show and given you the two main theories regarding its main villain. We hope you had a fun read and that you’ll keep following us for more.