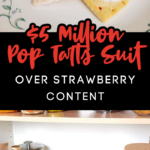 Pop Tarts. Is there really anyone who thinks there is an ounce of nutrition in this tasty breakfast pastry in a box?

I definitely don’t buy Pop Tarts for their nutritional value. I pretty much go into it realizing they are made of sugar, more sugar, and sugar.

It doesn’t take a rocket scientist to examine the nutritional information on the box and realize Pop Tarts really probably aren’t the BEST choice if you are looking for a source of nutrition for breakfast — or whenever you choose to indulge on those addictive little sugary treats.

But, there is a person who is all up in arms, because she says that Pop Tarts claims to be a nutritional “health food.”

She is so upset over the issue, that she has actually filed a class action lawsuit stating that the “marketing is ‘misleading because they give people the impression the fruit filling contains a greater relative and absolute amount of strawberries than it does.'”

This Karen person is saying that REAL strawberries actually benefit your health when you eat them, but Pop Tarts don’t.

[The Plaintiffs are] citing a WebMD description stating that strawberries “protect your heart, increase HDL (good) cholesterol, lower your blood pressure and guard against cancer.”

Oh, my apologies. I didn’t realize she got her key information from the site that EVERYONE uses to self diagnose their ailments.

Get this, Anita Harris, who filed the suit, wants $5 million, because her Pop Tarts aren’t strawberry-y enough.

She says that Pop Tarts call themselves a “Frosted Strawberry Toaster Pastries,” but this is totally misleading. Apparently, the filling is made of other ingredients, like pears and apples, that aren’t strawberries.

The plantiff said she wanted more than a “strawberry taste,” which she nevertheless “failed to receive, due to the relatively greater amount of pears and apples,” according to the lawsuit.

I mean, you can’t make this stuff up!! Was she hurt? No. Was there some harmful effect from her Pop Tart consumption? No. Was her life altered in some way, because she bit into one of these “Frosted Strawberry Toaster Pastries?” No.

I wish I had enough time in my day to come up with hella frivolous (IMHO) lawsuits against multi-million-dollar companies.

Anita is complaining that Kellogg’s “only promotes the product’s strawberry content in its labeling and marketing, such as on its website.”

She wants the Pop Tart boxes to state that they are “Naturally and Artificially Flavored,” much like Walmart and Dollar Tree do on their toaster pastries boxes.

It might seem like this suit is completely bogus, and she doesn’t really have a leg to stand on. BUT, the new trend seems to be to attack food labeling. I mean, look at the Subway Tuna Fiasco.

So, can she really win this lawsuit? Well, that’s a maybe.

Some judges find that sellers have misrepresented their products, while others say if the consumer took the time to read the ingredients statement, they would know exactly what they were buying.

I’m all for taking down big business if they are really doing wrong, but part of me really hopes that Kellogg’s comes out on top with this one.