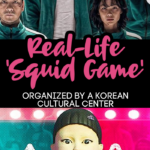 Have you been watching ‘Squid Game’?

I know a lot of you have probably binged the entire show already.

But I have been so busy that I haven’t finished it yet, although I am definitely hooked!

‘Squid Game’ is currently in the No. 1 spot for Netflix rankings in the US.

If you haven’t watched it yet, it’s a Korean series but you can use sub-titles or choose the voice-over.

It’s about people that are in financial ruin and are desperate to get out.

So they are competing in dangerous and deadly games to win a prize of $38 million!

Well, if you happen to be in the United Arab Emirates, there is a Korean Cultural Center in Abu Dhabi that is organized a real-life ‘Squid Game’.

What a crazy experience right?

There was not be any bloodshed or murder, but the games were ‘Squid Game’ themed at this event.

The event was open to 30 people that were split into two teams of 15 people.

The real-life ‘Squid Game’ event was held this week in Abu Dhabi.

The games played at the event were:

The games played in the Netflix series are popular amongst children in Korea and remind Korean adults of nostalgic childhood memories. But similar traditional games are played by children here in the UAE, too. I hope the global popularity of ‘Squid Game’ will be an opportunity to spread other aspects of Korean culture, too, such as Hangeul, taekwondo, as well as K-dramas and movies.

Players were not playing for prize money, although they were each given a customized green tracksuit.

The participants chosen for the event didn’t have to get slapped by a recruiter.

They simply filled out a form that contained 3 questions about the show.