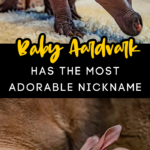 England’s Chester Zoo just welcomed its first baby aardvark for the first time in 90 years, and it is even more adorable than you think!

The little aardvark calf was born hairless, and is small enough for a person to hold it in their hands — which is fortunate, because it gets supplemented milk through bottle feeding.

See, aardvarks have a reputation for being “clumsy” when it comes to their babies, and zookeepers just want to make sure the little calf gets all the care and nutrients it needs.

Wait until you hear this little aardvark’s nickname!

If you guessed Dobby, from the Harry Potter Franchise, that is what the people at the Chester Zoo thought too!!

They nicknamed this little, hairless, wrinkled aardvark with the oversized ears — “Dobby!!”

Dobby was born on January 4th, and is doing just great!! It has been bonding and snuggling with his mommy, Oni — which is a good thing when it comes to aardvarks.

Zookeepers haven’t been able to determine the sex yet, but that’s just fine with me. Dobby fits perfectly!!

Now, it probably won’t always be named “Dobby.” That is just the nickname they have given it for the time being. Don’t be surprised if little Dobby’s name changes to something else in the future.

Dobby is one of only 66 aardvarks found in zoos across Europe, while there are 109 aardvarks living in accredited zoos globally.

That really isn’t very many aardvarks living in captivity, in the grand scheme of things!!

In the U.S. alone, there are well over 2,400 zoos spanning multiple cities and landscapes.

So, if you have been lucky enough to see an aardvark in captivity, you are one of the lucky ones!!

But, a baby aardvark? Almost unheard of!! It might be time to schedule a holiday to England to see little Dobby!

Native to sub-Saharan Africa, aardvarks can be hunted for meat and are threatened by habitat loss because of new agricultural development, according to the zoo.