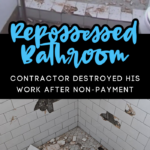 Remind me never to cross this contractor — or don’t let me hire him, either one!!

Way over in Colorado Springs (it might not be too far for some of you) Amber Trucke has somewhat of a dilemma on her hands.

She needed some bathroom renovations done in her home, so she hired a contract company, Dream Home Remodels, to come do the work.

Their contractor took the time to complete the job, allegedly doing exactly what they were contracted to do.

But, when it came time for payment to be made, Dream Home Remodels claims that Amber didn’t pay in a timely manner.

So what did the contractor do?

He took matters into his own hands, and “repossessed” his work.

How do you repossess a bathroom tile job, you might ask.

Dude took a sledge hammer, and smashed the crap out of everything in the bathroom. He hit the bathroom tile so hard that it made a crack in the backside of the wall.

Amber’s neighbor saw the man going into the house, and tried to reason with the man. He was having none of it.

This neighbor quickly turned her camera on the guy, and caught the entire smash party on video.

It’s kind of a he said she said scenario.

Dream Home Remodels doesn’t have much to say about that. They just say that Amber didn’t pay in a reasonable time frame.

Amber claims that she was waiting to pay until she saw the work, and could make sure that everything had been completed to her liking. (She hadn’t seen it yet? I’m wondering exactly how long Dream Home Remodels thought was a “reasonable” amount of time for payment.)

Dream Home Remodels says they have never had to do anything like this before, and it’s not standard practice.

Well they sure enough did it this time!

Amber says she is definitely going to sue the contractor over this incident. Not only does she say that she paid about half the money, the contractor created more damage than just “repossessing” his work.

The police are looking into the matter, and trying to decide if this little attempted repossession is a civil or a criminal matter.

I’m just going to go ahead and tell you that this company gets a 1.5 out of 5 stars on Yelp, if that tells you anything.