Here’s Everything We Know About The ‘iCarly’ Revival 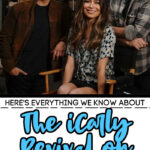 If there is anything I know from being a mom to all girls, it’s ‘iCarly’ and shows like it. My girls were obsessed with it!

My oldest even made a similar YouTube inspired by the web series on the television show. It was just her and her best friend at the time doing goofy stuff.

The show was fun and it was actually something that we could sit down as a family to watch.

The song is still stuck in my head many many years later.

The show was originally on Nickelodeon and starred Miranda Cosgrove as Carly Shay after she had been on the show ‘Drake & Josh’. This was another show we all watched together.

Now the show is headed to Paramount+ as a revival! They ordered a continuation of the Nickelodeon series at the end of 2020.

Joining Miranda Cosgrove will be Jerry Trainor! He played her big brother and guardian, Spencer Shay, on the show and he was also on ‘Drake & Josh’.

Nathan Kress, who plays Freddie Benson, is also returning! However, Jennette McCurdy, who had played Sam Puckett, will not be returning.

The original show ended in 2012 after being on air for 6 seasons. The newest season will feature 13 episodes.

This revival is slated to premiere on Paramount+ this summer. I only have one question, will Gibby be there?

3 shares
The New Froot Loops Gummies Tastes Similar To The Fruity Cereal We Know And Love
← Previous
These Origami-Inspired Clothes ‘Grow’ With Your Child and They Remind Me of The Popcorn Shirts From The 90s
Next →
Click here to cancel reply.