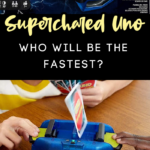 You’ve never seen an Uno game like this one before!

My family is just about the most competitive group on the planet. We love us some game nights!

I will say, our first choice is usually to reach for a fun version of Monopoly, but this Uno game just might change our game night tradition.

Uno by itself is a pretty fun game, but throw in cards flying in the face of your opponent, and I’m all in.

Anticipation is everything in this UNO Showdown Supercharged game — And don’t forget the other key to winning — when a player is down to only one card, they must yell “UNO!”​

Just like with the normal Uno game, you try to match colors and numbers. But, there is a supercharged twist with this Uno game. This version has a Showdown card that takes the game to a whole new level.

When a Showdown card is played, get ready for a one-on-one face off! Both players put their hands on a paddle — then when the sounds and lights of the UNO Showdown Supercharged unit go off, they try to be the first to push down to send cards flying out at their opponent!

The Showdown Supercharged Light is unpredictable. It can go off at any time during the showdown, so you have to be on your toes!

Now, this Uno version will only set you back about 15 bucks, and it might just be the most fun 15 bucks you have ever spent!

You can get this Showdown Supercharged Uno Game on the Amazon website.