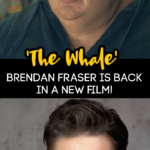 Brendan Fraser is back, and I literally couldn’t be happier about anything else on earth right now.

When I think of movies from the 90s — who my favorite actor was from that time — without a doubt, Brendan Fraser is the first actor that comes to mind.

Every single movie he made was gold. School Ties, Encino Man, With Honors, Airheads, Blast From The Past — I eagerly sat through them all. And, better than just sitting through them, I loved them!

Then, 2003 happened, and he pretty much fell off the face of the earth.

In 2003, he accused the president of the Hollywood Foreign Press Association, Philip Berk, of sexual assault, and that seemed to be the beginning of the end for our favorite Encino caveman.

We went YEARS — seemingly more than a decade — without hearing his name.

He had roles, but they were teeny tiny roles. Definitely not the blockbusters he tore through in the 90s.

Brendan Fraser is starring in The Whale. It is the film adaptation of Samuel D. Hunter’s acclaimed 2012 play of the same name, and we have the first picture!

According to Entertainment Weekly, The Whale is “centered on Charlie (Fraser), a reclusive English teacher suffering from a compulsive eating disorder who attempts to reconnect with his estranged teenage daughter, Elle (Stranger Things breakout Sadie Sink).”

It’s gonna be like something you haven’t seen before — That’s really all I can tell you. The wardrobe and costume was extensive, seamless, cumbersome. This is certainly far removed from anything I’ve ever done but not to be coy … I do know it’s going to make a lasting impression.

The Whale is set to premiere at the 2022 Venice Film Festival, but it does not have a theatrical release date yet.

You KNOW I will let you know as soon as we get word about a drop date.