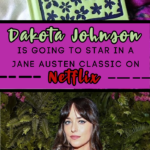 Dakota Johnson has been tapped to star in a remake of a Jane Austen classic, and you are going to get to watch it on one of your FAVORITE streaming platforms.

Netflix is at it again with another Netflix Original that is sure to knock it out of the park.

The streaming giant is remaking Jane Austen’s Persuasion, and you know it’s going to be ah-mazing!

Now, this isn’t the FIRST time this novel has been adapted for the screen.

But, on this time around, Dakota Johnson is going to be playing the character of Anne Elliot, and I can’t wait to see her take on such a classic character.

Described as a “modern, witty approach” to a beloved story, “Persuasion” tells the story of Anne Elliot, an unconforming woman living with her snobby family on the brink of bankruptcy. Unmarried and 27-years-old, Anne reconnects with a man she was once persuaded to reject and faces a second chance at love.

Now, I probably don’t even have to tell you who Dakota Johnson is — I KNOW you have watched the Fifty Shades saga — but you may have also recently caught her in Our Family or The High Note.

Production has not yet started on this film, but it is expected to start in May.

We will be anxiously awating this version of Persuasion when it hits Netflix in the near future.

We are also looking forward to ANOTHER fun redo on different streaming giant — HULU.

How I Met Your Father is set to premier on Hulu, and it’s going to star Hillary Duff.