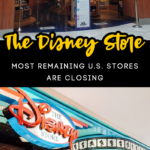 As a self-proclaimed Disnerd and a former manager at our local Disney Store, this news just cuts me to the core.

According to WDWNewsToday, Disney is shutting the gate on almost all the remaining Disney Stores in North America, and I’m not okay.

Some of the Disney Store outlets will remain open — for now — but they are closing all the standard Disney Stores across the nation.

When Disney took back over ownership of the Disney Stores — back in 2008 — a bunch of locations were shut down, and only the highest trafficked stores remained.

My store got the axe, but luckily we still had 2 Disney Stores we could frequent within a 2 hour drive.

Then, a few months ago, Disney did another round of closures, and our closest store didn’t make the cut.

NOW, Disney is saying that they are going to go ahead and close all the stores that aren’t outlets.

Where in the world are we supposed to go to get our Disney fix?!?

The closures are going to happen FAST!!

You can expect all stores to shut their gates for the last time at the end of September.

An announcement will reportedly be made tomorrow addressing the impending closure of nearly all of the remaining Disney Stores across North America. A few Disney Store Outlets will remain open for the time being, but most standard Disney Stores will close by the end of September.

Disney has previously partnered with Target to bring mini Disney Store to the inside of some lucky Target locations.

They will also keep their online presence. So, at least there’s that.

But, seriously, that is not the same as going in and immersing yourself in the Disney magical experience at the Disney Store.

I feel bad for all the Disney Store cast members who have poured their Mickey-loving souls into their stores. They are about to be let go. I know that pain, and it simply sucks.

So, you might want to make one last visit to your Disney Store. Tell Mickey you’ll “see him real soon.”

If there is any good news in this situation, where there are store closings, there are usually massive sales. *Smile Emoji*

Is anyone else not a fan of the mini “Disney Stores” inside Target besides me? First most of the stuff are mostly for kids like clothing, bottles, cups, stationary sets, and figurines. And the other toys they already sold them at Target just that they move the Disney toys over there so it doesn't feel that special. When there’s adult clothing they are so limited. There’s really nothing for adult Disney fans which I miss at a regular Disney Store. Also customers do a lot of put backs so all the Disney merch is scattered all over Target. I saw a Donald Duck sweater that I had my eye on but it was in the paper plates isle and there was a purple stain on it :( Also cracked and chipped mugs and ornaments by customers. I don’t like buying on shopdisney because the prices there are more expensive than the parks, they don’t do that much sales, shipping costs, package lost/ delays, ceramic items arrive broken or sloppy paint, and I keep getting my orders cancelled because they are out of stock. Bring back real Disney Stores.

It is so sad to see this