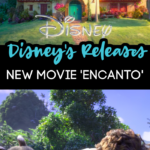 Disney strikes again with another animated and magical movie.

Since Disney is all about magic and lessons learned, we can’t help but wonder what life lesson will end this magical film.

Disney’s new movie Encanto features a girl in Colombia who faces frustration because she is the only member of her family who sadly, does not have magical powers.

In the opening clip, we see Disney replace Cinderella’s castle for a colorful cement house filled with magical wooden floors, enchanted tea cups, and staircases that turn into slides!

An entire family consumed of magical powers with one who we assume can even talk to animals, excludes one sibling named Mirabel who does not have the ability of making flowers bloom, super strength or making inanimate objects move.

Disney’s new film is expected to release sometime in the fall, however it’s up to the big mouse when the public will found out exactly when Encanto will launch.