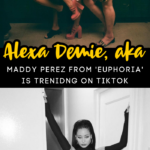 Let’s just say that Maddy Perez is not only the star of Euphoria, but TikTok’s latest muse too.

While your ‘fyp’ may look different from your neighbor’s next door, Alexa Demie aka Maddy Perez, and Nate’s ex-girlfriend in the show is the newest lip-synching challenge on the social media platform.

And if you haven’t watched the ten episode series just yet, be aware of spoilers as you continue to scroll.

As the recent episode of Euphoria taught us coach potatoes a lot about the characters in the show, there’s one, okay, maybe two main points to be taken away from last week’s drop.

Point number one, is that observers are always listening even if you think they aren’t and two, Maddy’s now ex-best friend Cassie has made some pretty bad mistakes.

Considering Lexi kept the summary and nonetheless the title of the play a secret from everyone at school, as soon as the play began on stage, students from East Highland High School specifically the main characters of Euphoria, noticed that the play was about each and everyone one of them.

Specifically Maddy, who realized the play was based on a true story, turned to her friend Kat while sitting in the audience and said ‘Wait, is this f**king play about us?’ the very line that is being lip-synched on thousands of ‘for you pages’!

So now that you know the background story of where the famous quote comes from in the show, the sound bite of Maddy’s realization about the play has been used in over 51,000 TikToks!

Euphoria’s tenth and final episode for the second season premiers today, February 27th at 9pm Eastern Time on HBO Max, and if you haven’t had time to watch the show, get out from under your rock, grab a glass of wine, and binge the show as you should!