Be it the for holidays visiting family, vacation or if bi-coastal commuting is just a necessary party of your job, air travel has become as common as a round of antibiotics to fight the sniffles. Cram a hundred and fifty anxious-to-get-where-they’re-going people on a jet and there’s bound to be an issue or two. Still, I have faith in humanity. I believe most people are good, do their fair share and often more, contributing to the betterment of society. When there’s yin, there also has to be yang–which by default means there are plenty of assholes in the world. And inevitably they’re within crotch-punching distance of me on airplanes.

I’m not talking about the guy who hogs the arm rest or the lady who insists on reclining her seat. I’m talking about 10 particular types of assholes on airplanes–the people you’d gladly use as a flame retardant in a hoverboard fire. 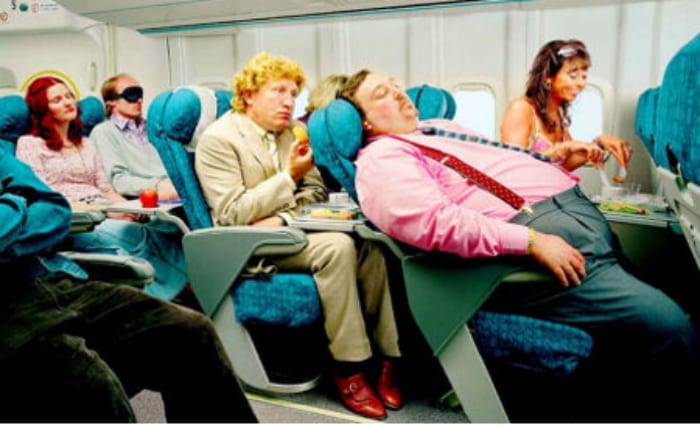 1). The Self-Important Douche a.k.a. The Loud Talker

There’s always the one who gets on his cell phone the minute he’s seated. “Man, I’m going to have to hire someone just to manage my Facebook account. I get two hundred friend requests a day! My business is growing so fast I can’t keep up!” Do you think you’re impressing anyone or that those around you care? Keep on starring in your own show McDoucherson!

Man says to his buddy in the seat next to him, “Dude, let’s get trashed on mimosas.”  First, is that even possible? And if it is, you’re either a binge-drinking college boy or you’re a wuss. End of discussion.

Hey you! Guy who carried on the Gastro Home Wrecker also known as the biggest, smelliest sub sandwich ever, then rushes to the lav thirty minutes into the flight, making sure the entire plane regrets your decision. You think it’s funny? You think bodily functions are acts of God and nature. There’s nothing Godly or natural about what traveled through your body at light speed.

Hey, I’m with you.  I want to be comfy, too. Eighty percent of my day is spent barefoot. THE last thing I want to do on a transatlantic flight is wear the heels I’d forced myself to endure during my last business meeting. But I don’t have the green fog oozing between my toes either. Do me and yourself a favor next time: Be proactive. Keep a pair of slippers in the side pocket of that carry-on. No one else needs to bear witness to your sweaty-footed podiatric stench.

Ok, I get it. You’re excited about your long-overdue girls’ trip to Cancun, but do you REALLY need fifteen selfies before we ever leave the terminal? If you can’t get the perfect pic after three tries, it’s your face, not the camera angle. 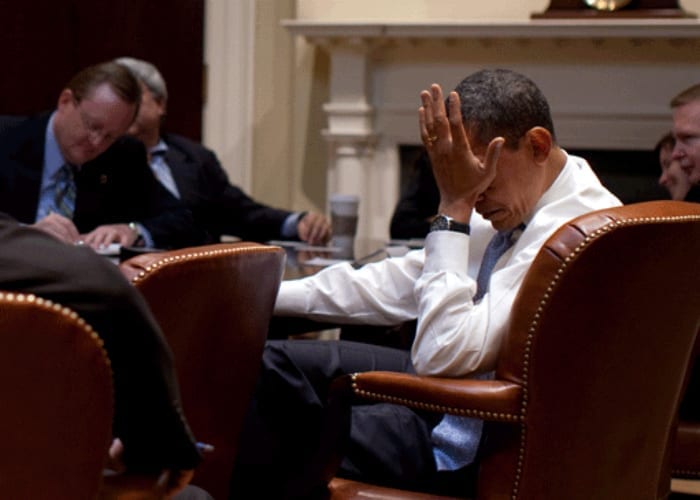 I have major empathy for those traveling with infants and toddlers. The altitude can wreak havoc on little ears, not to mention what the sea of unfamiliar faces, scary noises and feelings of general confinement can do. But when your bundle of joy understands actions have consequences and continues to kick the back of my seat and mom and dad have thrown up their hands without so much as an apology, that’s when it’s on.  Like Donkey Kong.

Jack, as in Jackass. This is the guy who thinks the rules don’t apply to him. He continues to work on multiple gadgets until the flight attendant has to threaten to kick him off the plane, he’s rude, and upon landing he elbows his way out the door first because his time is more precious than anyone else’s. Karma is saving up special flight delays for you, Corporate Jack. I just hope the rest of us don’t get caught in the crossfire.

I can appreciate parents who prepare for flights with plenty of snacks and things to keep kids entertained. But leaving this behind is just plain wrong. 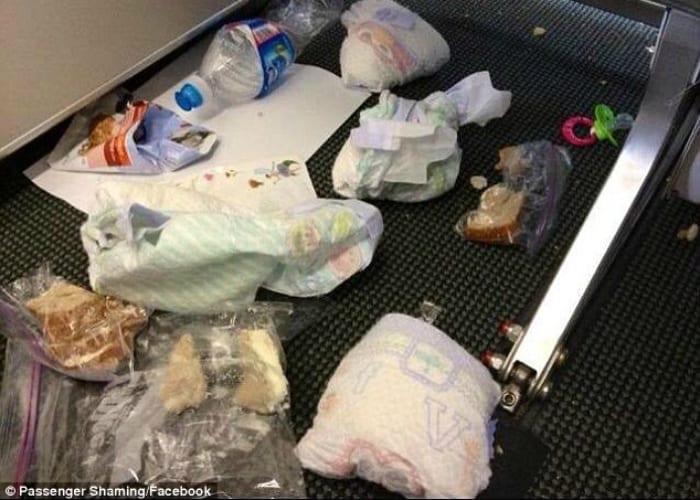 Like most professions, I know you’re overworked and underpaid. Corporate doesn’t support you and you’ve had your fill of jerks. But all passengers aren’t bad. You don’t have to become an asshole to put another one in his place.

Look, y’all…flying is hard on all of us. But it’s also a necessity. Unless you want to spend 20 hours jammed into a Greyhound for your next trip from Dallas to New York, flying is a part of life. So let’s just try to make it a little easier on everyone, m’kay? I’ll start: I promise not to ‘accidentally’ trip you in the baggage claim area if you can promise to maybe not do those ten little itty bitty things I listed above.

Anyone you want to add to the ‘No Fly’ list? Tell us about it in the comments below!

No wait for downloading free mozilla forefox web browser as this browser is of latest technology having advanced feature which are also safe and secure to use. You can maintain privacy to your work too and this browser provides exacts results within few minutes

This is an academic study by a Master’s student at LaTrobe University in Melbourne. The survey is for current US citizens living abroad. More information and contact details on the first page at the link

I remember coming to my first LOPSA-East, not too mention my first trip to NJ. Walking in John was great about showing me around and making sure I had everything I needed. He'll be missed... getting a little teary.. Thanks John

Very attractive and realistic for me and because your art have some different touch for every person.This is a reason I love your art.

Hello, Look, y’all…flying is hard on all of us. But it’s also a necessity. Unless you want to spend 20 hours jammed into a Greyhound for your next trip from Dallas to New York, flying is a part of life. So let’s just try to make it a little easier on everyone, m’kay? I’ll start: I promise not to ‘accidentally’ trip you in the baggage claim area if you can promise to maybe not do those ten little itty bitty things I listed above.