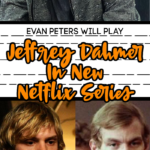 It’s been a bit since I told you about the new series coming to Netflix from Ryan Murphy. It’s called ‘Monster: The Jeffrey Dahmer Story’.

The series is all about Jeffrey Dahmer, one of the most notorious serial killers in America.

It’s supposed to be from the viewpoint of his victims. This is a lot different than anything else that has been done on Dahmer.

We had already announced that Richard Jenkins will star in the limited series as Jeffrey Dahmer’s father Lionel.

They were still searching for an actor to play Jeffrey Dahmer, and they’ve finally chosen!

Evan Peters from American Horror Story has been chosen to play the notorious serial killer! I totally think he can pull it off, he’s a great actor!

I’m interested in seeing it from this new perspective. They’ll also focus on how Jeffrey Dahmer was able to kill for so long.

Did you know that he was apprehended and released at least 10 times?

Jeffrey Dahmer was convicted of murdering 15 men and boys (that we know of). He mutilated them, practiced necrophilia, and also cannibalism.

I love watching shows like this because I am so interested in how a mind must work to do such wicked and horrible things. He was a sick dude. Will you be watching?