After the nightmare-inducing end to The Walking Dead: Season 6, you might expect season 7 to start out gently. But, no. It’s a bloodbath. A brutal, disgusting, horrifying, tearful, leave no fanbase untouched hellscape – and it completely sets the tone for what’s to come. This season, the group is facing an external force greater than they’ve ever faced before. Faced with the loss of their own, and struggles with illness, mental anguish, and a new lack of resources, the team has to decide whether living means merely surviving…or fighting back. Hold on to your favorite jar of pickles, because here’s everything that happened on The Walking Dead: Season 7!

Everything That Happened On The Walking Dead: Season 7

No time to read the recap? Check out the season 7 trailer in the video below!

Episode 1 “The Day Will Come When You Won’t Be”

During the Season 6 finale, we witnessed Negan brutally beating someone to death with a barbed wire bat. In the Season 7 premiere, that person is revealed to be Abraham. Daryl, overcome with emotion, punches Negan, who then kills Glenn as punishment. Negan uses further tactics to break the group and make them compliant. 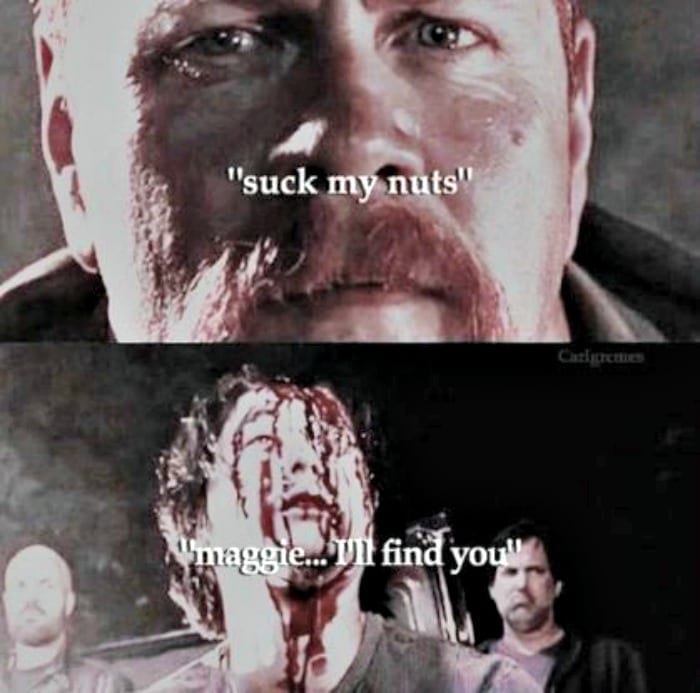 Far away from Negan and his torment, Carol and Morgan are taken to “The Kingdom”, another group of survivors, led by King Ezekiel. King Ezekiel is also under Negan’s thumb, but he has hidden this arrangement from his followers. Carol, now healed from her bullet wounds, agrees to stay in an abandoned house near the kingdom. 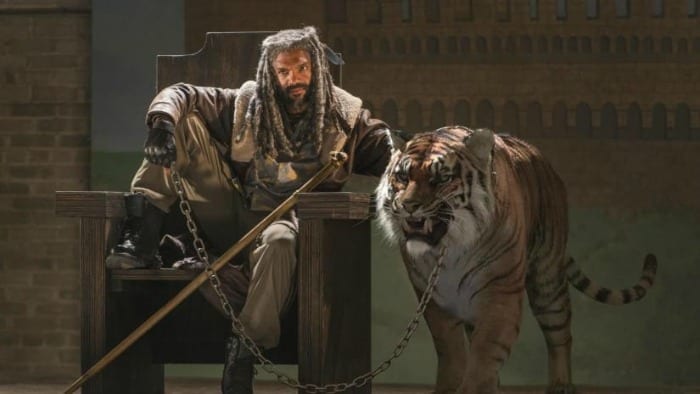 Captured as a hostage by Negan, we see Daryl being tormented by his captives. Determined to make him one of them, they torment him to no avail. Dwight, Negan’s crony, is sent on a mission to track down an escapee, who he kills rather than take him back to be tormented. 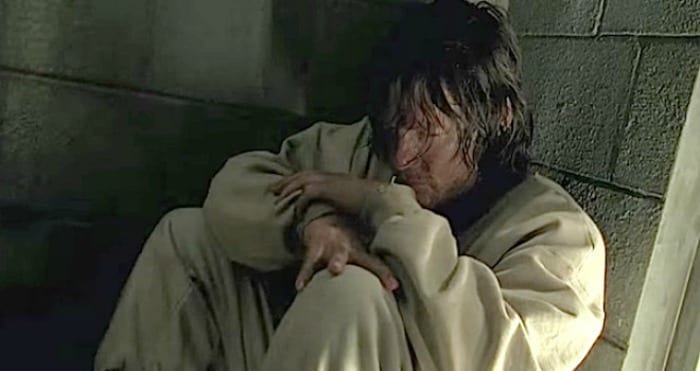 Negan and his crew show up a day early to get their supplies. They confiscate most of the furniture, the medicine, and all of the guns. Rick, who by now is a shell of his former self, encourages the group to comply with Negan for their own good. Rosita convinces Eugene to make her a bullet. 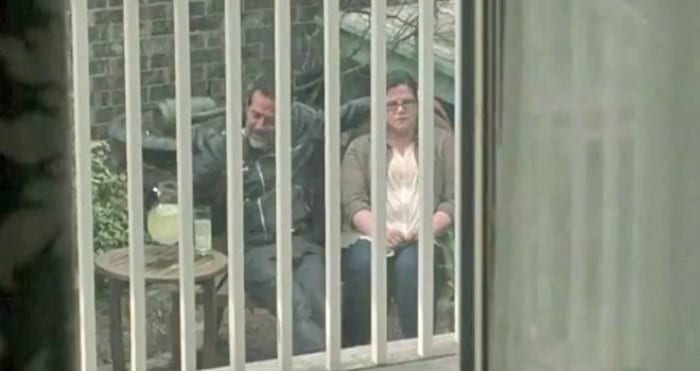 Carl heads to the Hilltop to visit Maggie. Maggie and Sasha are confronted by the leader of the Hilltop, who is sure they should leave until they save the settlement from a walker attack. When the Saviors show up, Sasha asks Jesus to find out where Negan lives. He sneaks onto a truck where he is met by none other than Carl. 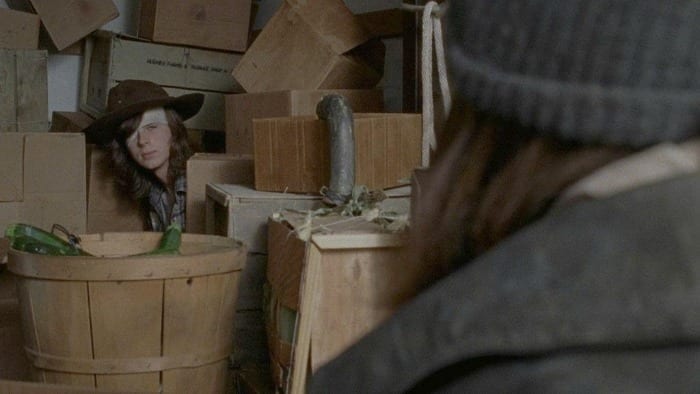 Tara and Health are separated when she falls off a bridge. She awakens on the shore of a beach where a little girl helps to revive her. Tara is lead by the little girl, Cyndie, to a group of settlers in Oceanside, a community of only women and children. The men were killed by the Saviors. She is given directions back to Alexandria and sworn to secrecy. 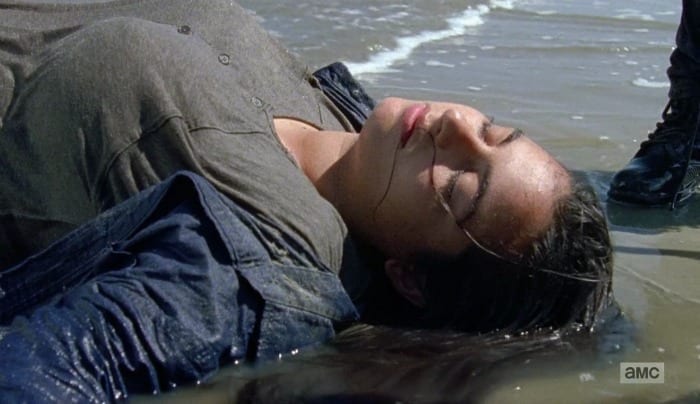 Carl and Jesus arrive in the Sanctuary, Negan’s home. As Jesus goes to scout the area, Carl makes an attempt to attack Negan. Impressed by Carl’s courage, Negan gives him a tour of the Sanctuary. 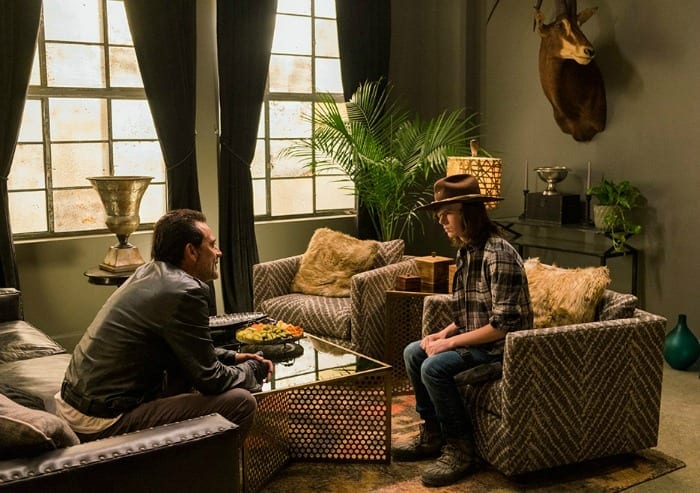 With the help of Jesus, Daryl finally escapes the Sanctuary. Spencer, the snake that he is, attempts to ingratiate himself to Negan, who balks at his duplicity and kills him. Rosita, enraged, uses the bullet Eugene made for her to shoot her one shot: which hits Lucille instead of Negan. Olivia pays the price with her life. 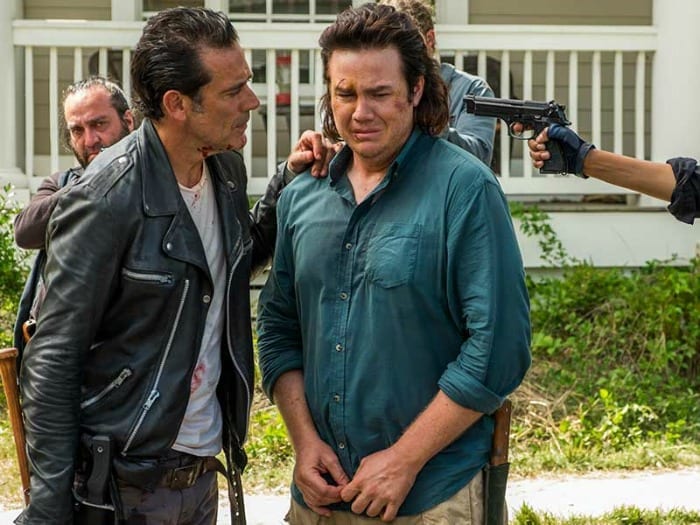 Episode 9 “Rock in the Road

The group finally meets King Ezekiel. They convince him to join their alliance to fight against Negan, and he offers Daryl shelter from the Saviors. Father Gabriel disappears with the group’s supplies but leaves clues behind. Following the clues, the group encounters the Scavengers. 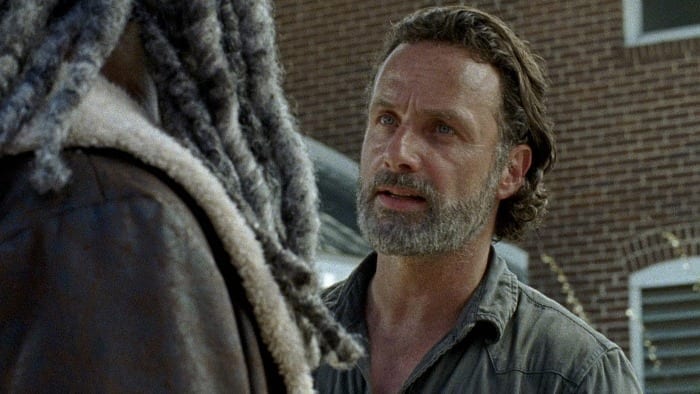 The Scavengers agree to join up with the plot to take care of Negan. Richard plots an assassination attempt on Carol, but is thwarted by Daryl. We know nobody messes with Daryl’s Carol. The group begins to head towards the Hilltop to prepare to fight Negan. 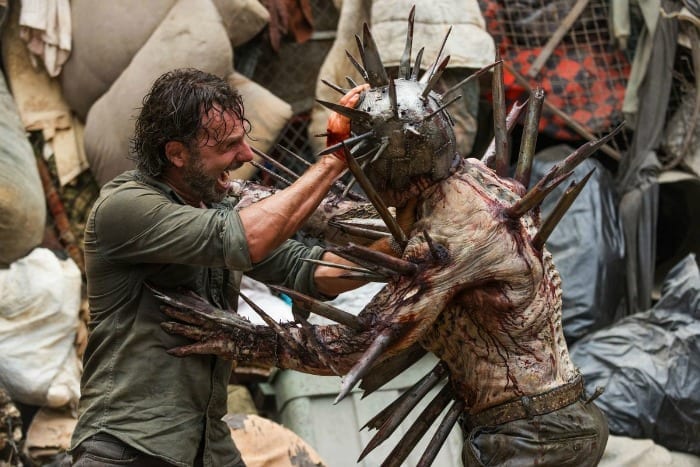 Eugene finds a way to become besties with Negan. Two of Negan’s wives convince Eugene to make poison capsules, but he won’t let them poison his bro. Dwight gets a note from his former wife, who lets him know she is the one who freed Daryl and that she has disappeared. Dwight frames the doctor, who Negan pushes into a furnace as punishment. 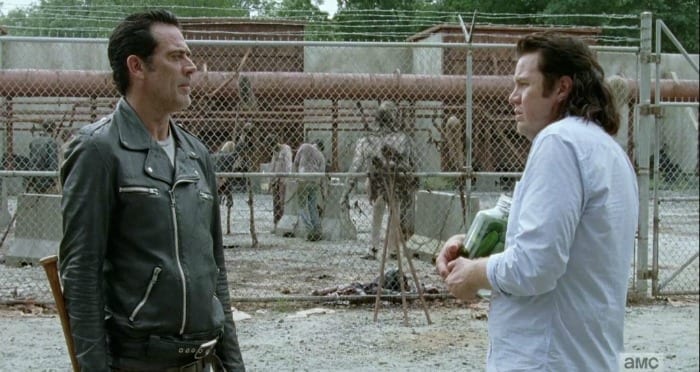 Jadis wants guns to pay for his alliance with the group, so they go on a hunt for them. Jadis is greedy and wants more. Tara struggles with keeping Oceanside a secret. 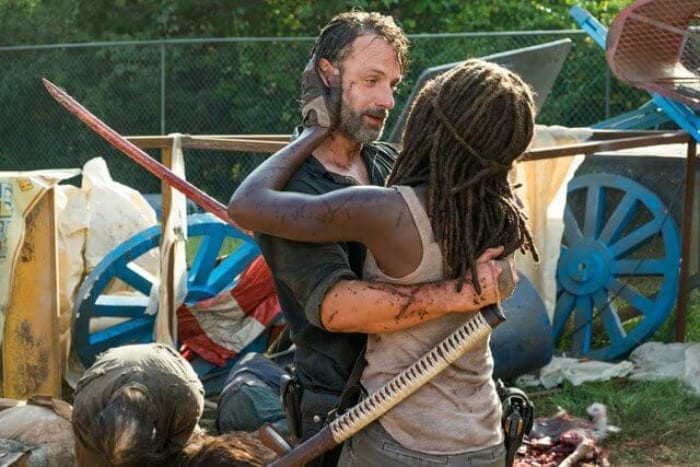 After finding a single cantaloupe missing, the Saviors kill Benjamin. Morgan discovers this was a set up by none other than Richard, and avenges Benjamin’s death by killing Richard. Morgan also tells Carol the truth about the fates of Abraham, Glen, and others. This convinces her to finally stop being selfish and come fight. 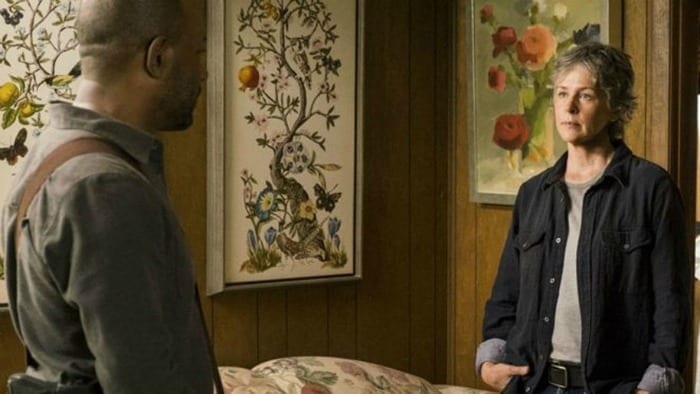 Episode 14 “The Other Side”

The Saviors spring up at the Hilltop, forcing Maggie and Daryl underground. At the Sanctuary, Rosita and Sasha try to convince Eugene to make an escape, but he won’t leave his bestie. Sasha convinces Rosita that Alexandria needs her and she should go back, which she does. 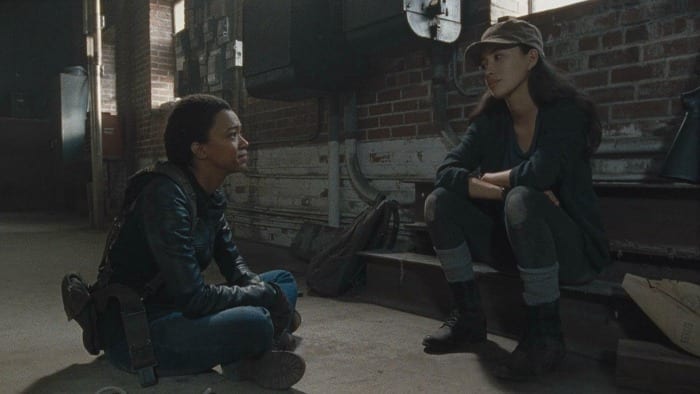 Episode 15 “Something They Need”

Tara rats Oceanside out in hopes of getting their help to fight Negan. They refuse to come fight, but agree to provide guns. Negan discovers Sasha and imprisons her, tells her he is well aware of Rick’s plot to take him out, and tells her she needs to go help. Sasha asks Eugene to help her find a way to commit suicide, and he gives her one of his poison capsules. What are friends for? 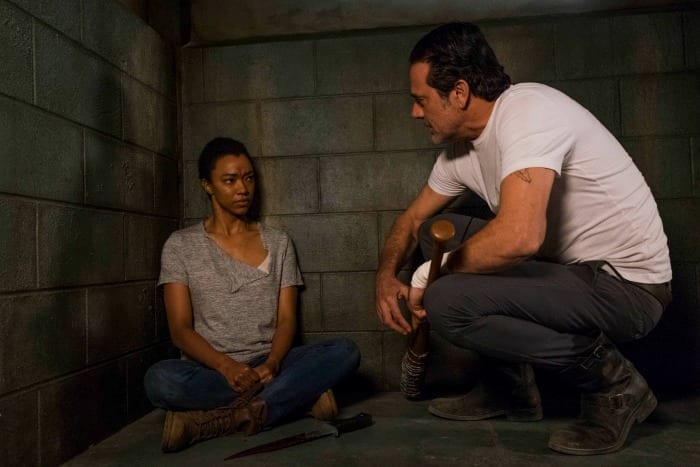 Episode 16 “The First Day of the Rest of Your Life”

Negan throws Sasha in a coffin to confront Rick with, but Sasha has the last laugh. She commits suicide on the way with one of Eugene’s poisoned capsules. The Scavengers reveal that they have been working with Negan’s group all along and a fight ensues. People from the other settlements join the fight, and Sasha, now undead, is put down. 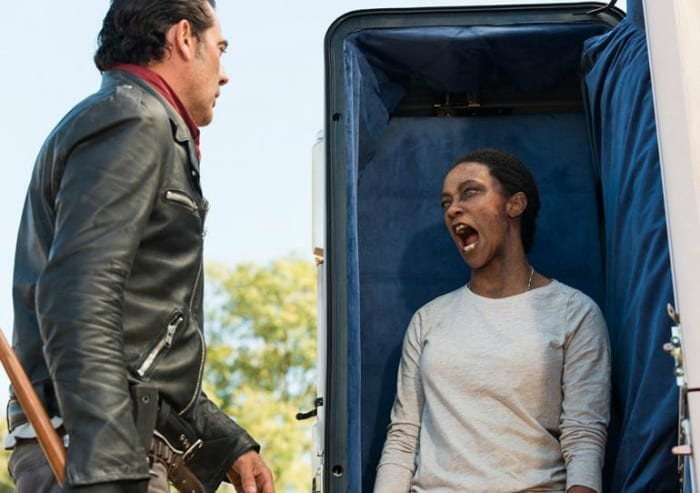 If you had become disillusioned with The Walking Dead over the past few seasons, this season will make you a believer again. This season gets back to what we have come to expect from the show. You will NOT be disappointed. Be sure to grab The Walking Dead: Season 7 on DVD to relive these moments over and over again!