Welcome back to Alexandria for The Walking Dead: Season 6! I hope you weren’t expecting a cozy sit down with one of Carol’s amazing baked goods, because it is going to be anything but relaxing this season. There are twists turns and HUGE surprises coming up quicker than a walker with an appetite.

As you’ll recall, the last episode of The Walking Dead: Season 5 culminated with Pete killing Deanna’s husband, and Deanna ordering Rick to kill Pete, the nasty abusive husband, which he does. Alexandria seemed like a mighty quiet place before our band of Walker wackers got there…and now they’re about to REALLY shake things up! 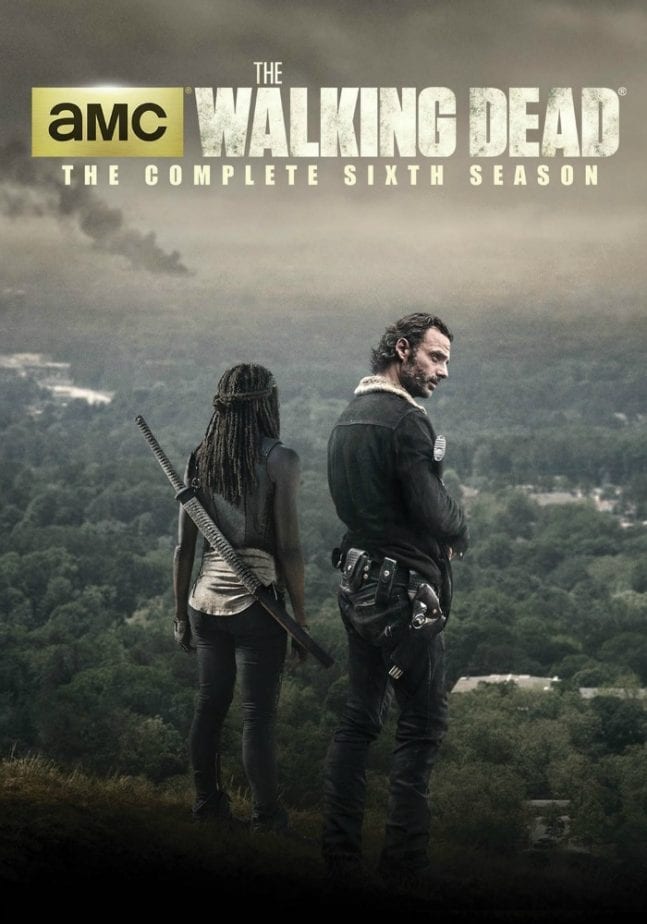 Everything That Happened On The Walking: Season 6

No time to read the recap? No problem! Here’s the trailer to get you started!

After the town meeting turned execution from the previous season, Morgan and Rick run into a large herd of walkers in a quarry. Rick, ever the diplomat, uses this opportunity to chew the Alexandrians out over their lack of self-defense, making them hate and fear him even more. Fortunately for him, the plot they devise to get rid of him falls apart. Don’t worry, it isn’t because his attitude improved. It’s because a honking horn sounds near Alexandria. The herd is on its way for brains and crumpets. 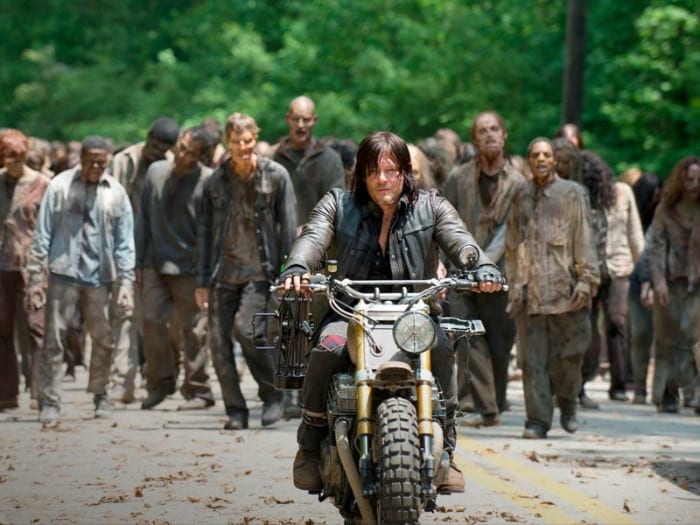 You may have been wondering where the horn came from, and who would be foolish enough to sound it. Of course it was Deanna’s pretty but perpetually stupid son, Spencer. Carol, ever the fighter, struggles her way into the armory to secure weaponry, while Kyle tries in vain to protect his friend Enid and Peter’s son, Ron. 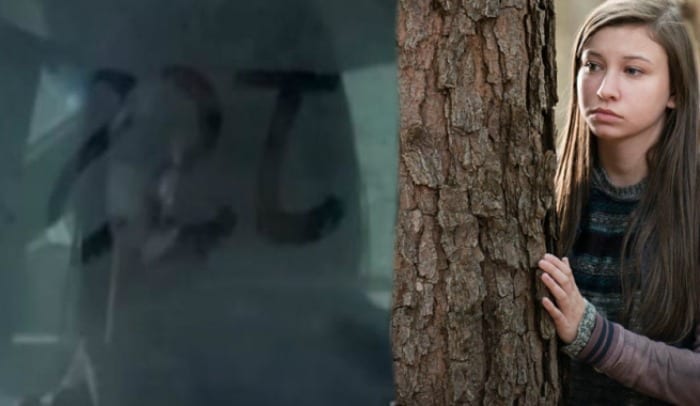 Another perspective from a group on the other side of the blaring horn: Michonne, Glenn, and several others join the fight to keep the herd of walkers away. Nicholas and Glenn find themselves trapped, and unfortunately Nicholas meets his demise…Glenn falls to the ground with Nicholas, and is surrounded by walkers eating flesh…end scene with Rick’s vehicle not starting. 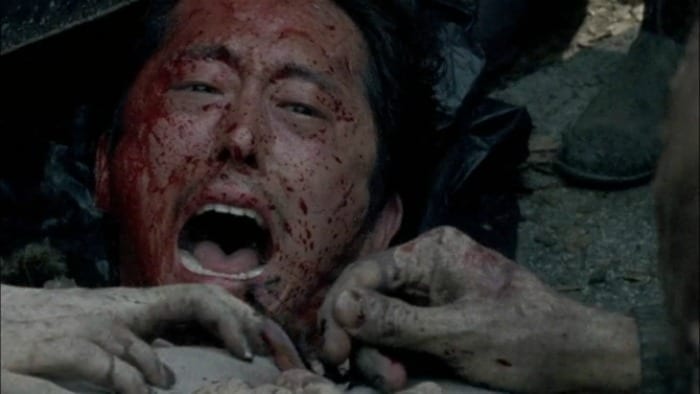 Morgan, struggling to reconcile his violent past, takes mercy on an enemy. This is a great flashback episode, and tells you what Morgan has been up to since he was finally able to “clear.” As Morgan is traveling, he meets a psychiatrist named Eastman. Eastman is the Mr. Miyagi To Morgan’s Karate Kid. He teaches Morgan the value of human life just as his own ends. 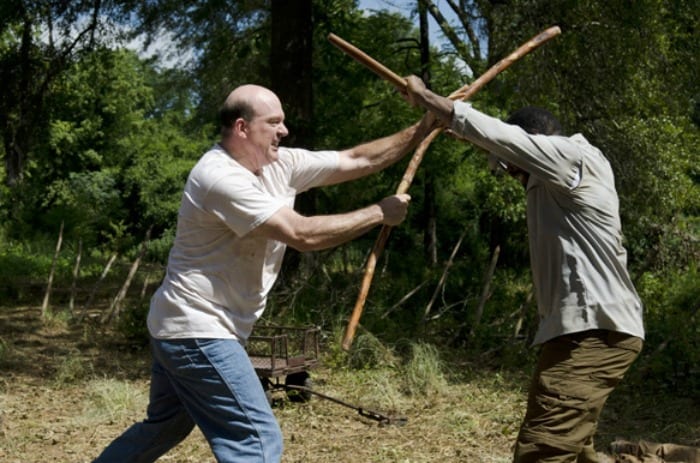 After encountering the Wolves (a terribly violent gang) and working to stave off the approaching herd, the crew finds itself stretched pretty thin. The Alexandrians, used to a life of relative comfort, balk at the idea of having to defend themselves. Maggie is on a search for Glenn. She finally confides in Aaron — she’s pregnant. 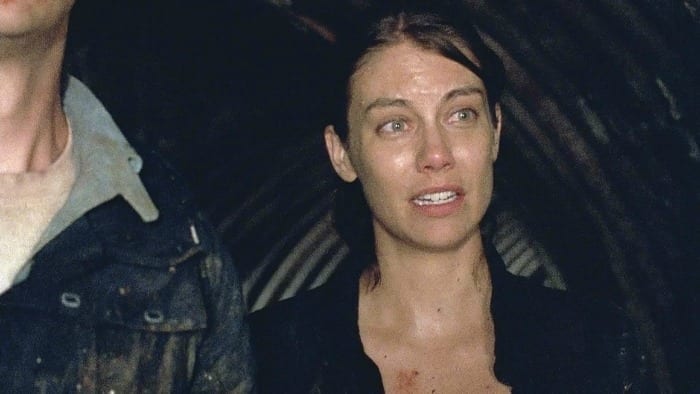 The gang continues to try to coax the herd away from Alexandria. Daryl is separated from Sasha and Abraham when a trio spirits him away. Eventually they run off with his bow and motorcycle leaving him stranded and terribly pissed. 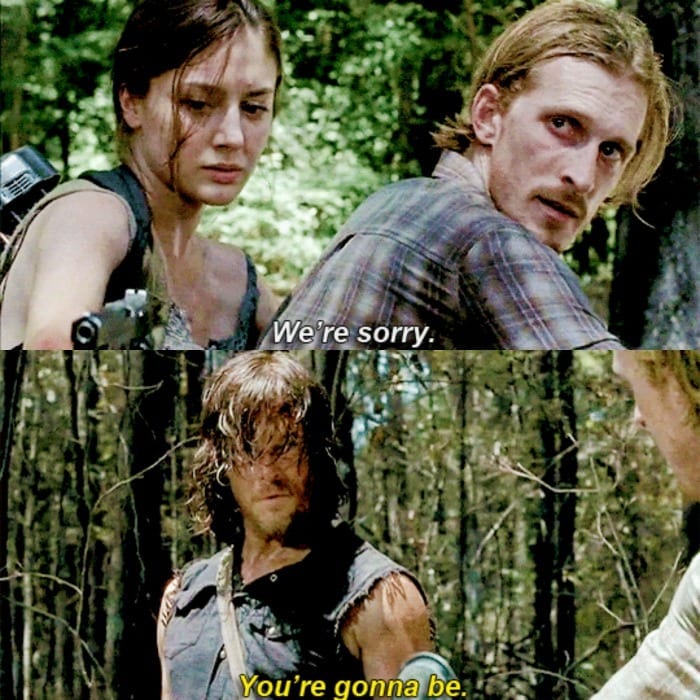 Glenn and Enid join forces to send a beautiful message of hope to Maggie, sending balloons in the air. As usual on TWD, when something beautiful happens, something equally horrific is next. The wall protecting Alexandria from walkers is breached! 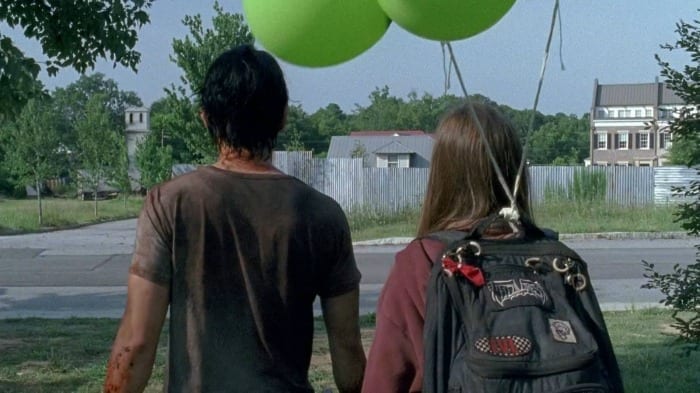 While taking shelter in Jessie’s house, the crew discovers that Deanna, has been bitten. Carol makes a terrible discovery at Morgan’s house, and the consequences are dire. After the credits roll, Sasha, Abraham and Daryl encounter the Saviors, who tell them their property belongs to some guy named Negan. 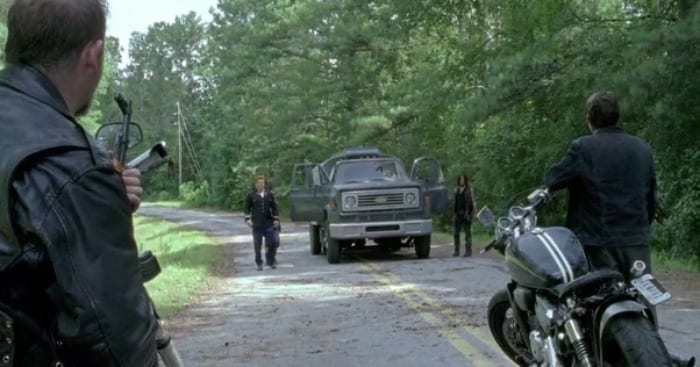 This is another episode where everyone dies! The Wolf dies trying to rescue Denise from walkers, Jessie and Ron get killed while trying to pretend to be walkers, and poor Carl gets shot in the eye. Daryl comes up with a great plan to divert the herd: fire. 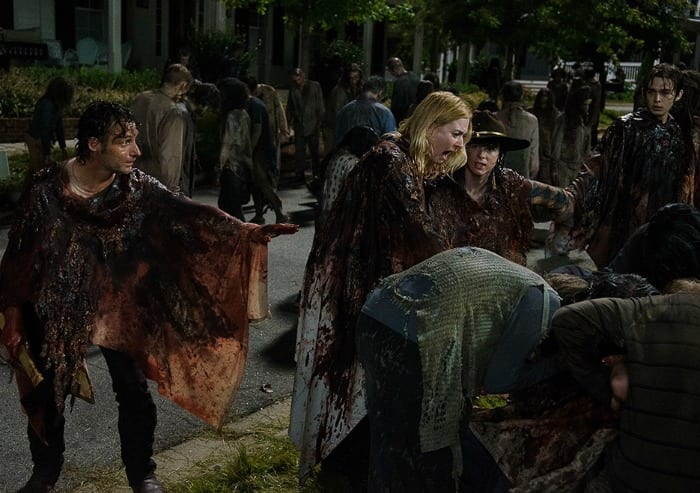 Episode 10 “The Next World”

The battle for Alexandria now won, things are just getting back to “normal” when Daryl and Rick encounter a man named Jesus. He is well informed and crafty. Meanwhile, Spencer finds his mother-turned-walker in the woods and has to make a hard decision. My heart broke for her turning! 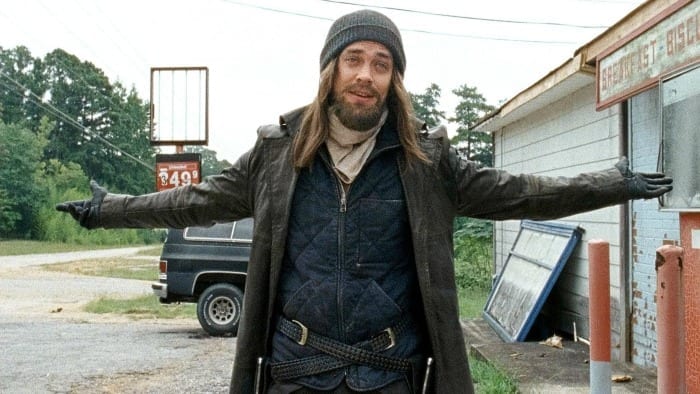 We learn about the people of another colony of survivors, the Hilltop, who have been under the thumb of Negan for some time. The leader of the Hilltop, mainly because he is a sexist ass, doubts Maggie’s skills. She takes him to task and strikes a deal to get rid of Negan once and for all. 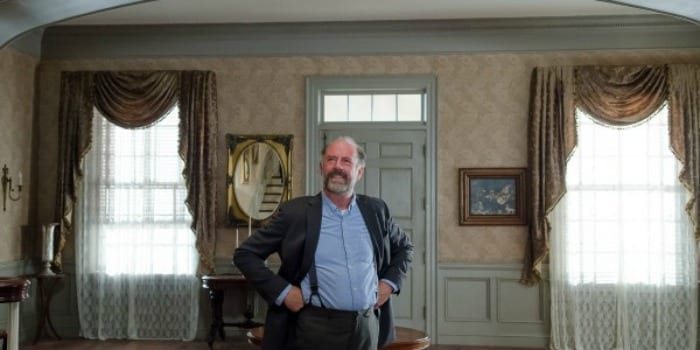 Episode 12 “Not Tomorrow Yet”

Carol has a conscience now. No, honest, she does. The group, determined not to fall prey to the Saviors stages a massacre on them. Carol, astonishingly, feels terrible guilt and I guess that’s what happens when you’ve spent several seasons teaching kids to kill? During the struggle against the Saviors, Maggie and Carol are kidnapped. 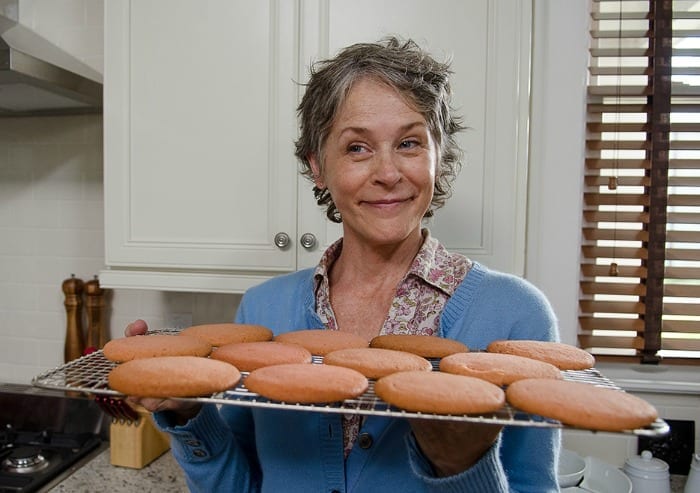 Maggie and Carol have been captured. The great thing about those girls they never say die, and soon make a daring escape. This is all to thanks to Carol playing the role of demure housewife. The captors threatened Maggie’s unborn child. Not the smart thing to do. The episode culminates in Rick killing Primo, the man who claims to be Negan. 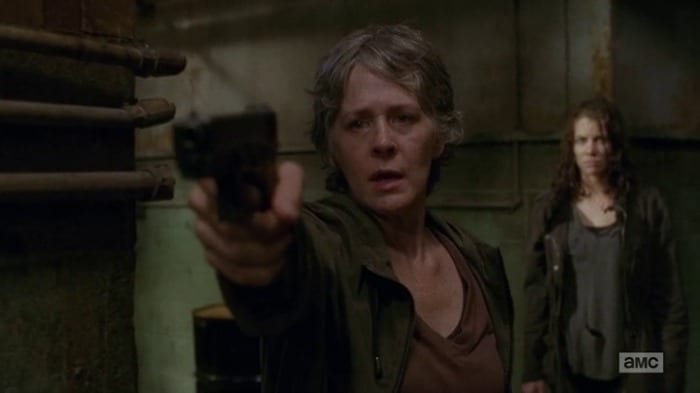 Abraham and Eugene, the ultimate bromance, looks like it is in danger of breaking up. Later, Daryl and Rosita are ambushed by Dwight and the Saviors, who wind up killing Denise…right in mid sentence. I loved me some Denise. Struggling with her conscience, Carol leaves Alexandria, leaving a note that she doesn’t want to be followed. 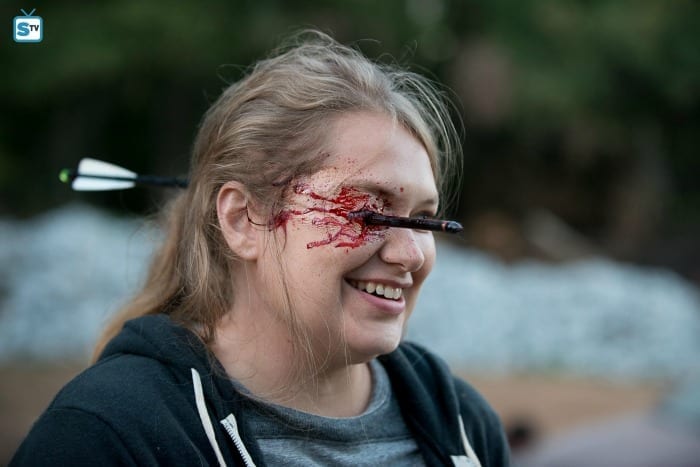 Alexandria is locked down, and Carol is pursued by the Saviors, who attempt to ambush her and wind up getting a soccer mom butt kicking. She kills all but one of them who continues to pursue her. Rick and Morgan, hunting for her, disagree over Rick’s treatment of a survivor. Part of the group is kidnapped attempting to avenge Denise. 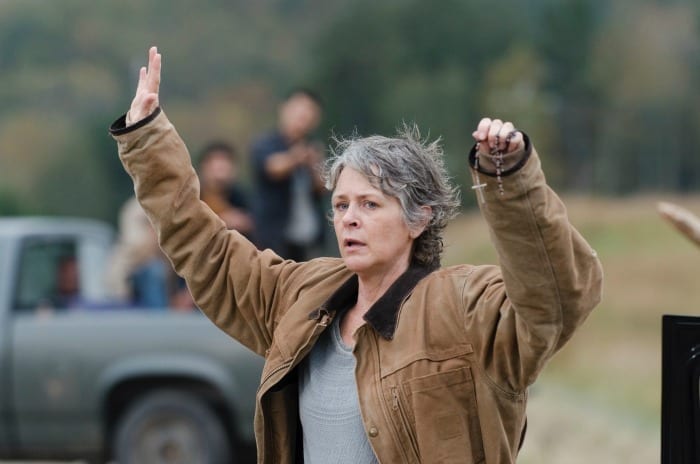 This season finale is a melee. The group goes on a mission to the Hilltop to get Maggie medical attention. In the process, they are captured by the real Negan, who gives them a brutal introduction to his barbed wire bat, Lucille. The episode closes with him bludgeoning an unseen member of the group to death. I screamed so loudly because I didn’t know who died. Over 18.1 million people cried, and you will, too…next season. 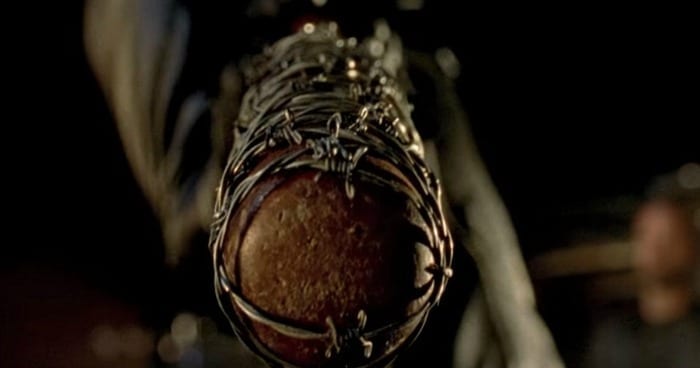 If your interest in TWD was wavering, this season will rekindle it. There is lots of action, the great escapes you love, and of course: Lucille. Buy The Walking Dead Season 6 on DVD now!