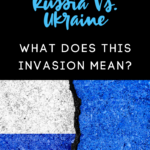 As you’ve undoubtedly heard by now, Russia has launched a full-scale attack on Ukraine.

What was just a Russia-Ukraine crisis, that everyone was watching, all of a sudden flipped on its head into war on Thursday, February 24.

What does this war on Ukraine even mean?

See, tensions have been running high between Russia and Ukraine for a while. But, in the last few months, things have gotten crazy tense between the two countries.

But, we have to back up just a minute.

So, basically, Ukraine used to be part of the Soviet Union, but became its own independent country back in the 90s.

That’s all fine and dandy, but Russian President, Vladimir Putin, sees Ukraine as historically part of Russia — and he wants it back.

Back in 2014 there was an operation that went down, overthrowing the pro-Moscow Ukrainian government.

What did this mean?

Basically, Russia became afraid that Ukraine would align itself more with the west, and they didn’t like that at all.

To bolster itself up, Russia took over the little peninsula of Crimea — just south of Ukraine. They still occupy the land today.

BUT, Ukraine, and the world for that matter, still consider Crimea to be part of Ukrainian territory under law.

The conflict has been ongoing ever since, and the UN estimates at least 14,200 people to have been killed in eastern Ukraine, including over 3,000 civilians.

See, Vladimir Putin, the Russian president, views Ukraine as traditionally part of Russia, and he wants it back.

I mean, why not? It is a good chunk of real estate — the 2nd largest country in Europe by area — with tons of resources that Russia could use.

Only, Ukraine doesn’t want to go back.

This week, Putin decided to declare that parts of east Ukraine are independent states, and they are now under the control of separatists who have the help and support of the Russian government.

What is a separatist? It’s a person who supports the separation from a larger body — in this case, east Ukraine.

So basically, east Ukraine has been taken over by people who think it should again be a part of Russia — and Russian troops have now been stationed there.

Are you confused yet?

On Thursday, Russian President, Vladimir Putin, authorized a ‘special military operation’ to go down in Ukraine.

What is this ‘special military operation?’ Basically, it’s war.

[Putin] added that Russia does not have a goal to occupy Ukraine, but said the responsibility for bloodshed lies with the Ukrainian “regime”. Putin also warned other countries that any attempt to interfere with the Russian action would lead to “consequences they have never seen”.

A number of civilian areas have been targeted, including one apartment complex outside of Kharkiv – a city of 1.4 million people in north-eastern Ukraine.

So now, tens of thousands of Ukrainian people are trying to get out of the country. There has already been blood shed, and obviously they don’t want any part of it.

Those left in Ukraine are having to hide in air-raid shelters to avoid the bombings.

What does this war mean for us?

[Biden] has [made it] clear that the Americans are not willing to fight, even though the Russians clearly are. Furthermore, he’s ruled out sending forces into Ukraine to rescue US citizens, should it come to that. And he’s actually pulled out troops who were serving in the country as military advisers and monitors.

Yes, you read that right. He isn’t sending in forces to rescue US citizens that are trapped in this mess.

Biden doesn’t want to spark a “world war” by risking a direct clash between American and Russian troops in Ukraine and he’s been open about that.

Besides the U.S., Russia has the largest nuclear stockpile, and we sure don’t want it to come to blows with nuclear weapons.

What economic impact will the Ukraine war have?

Russia is a major producer of oil and natural gas, and the geopolitical conflict has sent prices of both sharply higher in recent weeks. It is also the world’s largest wheat exporter, and is a major food supplier to Europe.

While we don’t get much imported directly from Russia, the economic impacts might affect us indirectly.

Those other countries that DO get imports from Russia will be affected, and we might end up in the crossfire.

— a commodities crunch caused by a conflict could have knock-on effects that at least temporarily drive up prices for raw materials and finished goods when much of the world, including the United States, is experiencing rapid inflation.

Is the Ukrainian war going to send us into World War III?

It’s not likely that this will be the start of World War III.

Unless the U.S. and Nato get involved, it’s just a war between the countries of Ukraine and Russia.