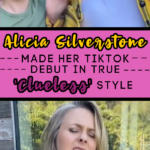 Alicia Silverstone just joined the world of TikTok, and she burst onto the social media giant in the most EPIC way!!

One of my FAVORITE movies of all times is CLUELESS!

It totally defined an entire generation — my generation!

I think I can just about quote the entire movie, and I’m not even embarrassed about it.

Alicia — who is now 44 years old *SHOCKED EMOJI* — took to TikTok to recreate one of the most iconic scenes of the movie, and I absolutely love it!

Cher Horowitz is in full effect, as Alicia perfectly quotes, and nails, the CLUELESS scene — even down to the yellow jacket.

Ugh! As if… I wouldn’t join TikTok

She even got her son, Bear, in on the act, and it’s the cutest thing ever!!

Now, Alicia has been at the forefront of news recently, as she has been a vocal activist in trying to get Starbucks to drop their vegan milk upcharge.

But, this TikTok from Alicia is not about being an activist, it’s not here as a soapbox to get her point across, it’s just pure fun, and it’s seriously the BEST!

I love to see when celebrities can recreate iconic scenes for their fans, and this reboot, if you will, does not disappoint.

Can you believe it has been TWENTY SIX YEARS since the OG CLUELESS burst onto the screen?!?

I feel so old right now.

Too see Alicia’s FULL TikTok performance, you can go to her newly created TikTok page, aliciasilverstone.