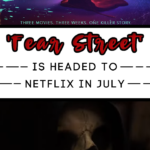 It’s about to be Halloween in July, because Netflix is bringing us, not just one, but a TRILOGY of scary movies starting at the beginning of the month.

Fear Street is one of the most popular book series ever written by R.L. Stine, and they are about to bring the series to the big screen — well, the big Netflix screen, anyway.

You might know the name R.L. Stine from the Goosebumps series, but as you can probably imagine, this trilogy is going to be much more scary, and targeted at an older audience — no kids allowed for these films!

This story is told sort of backwards, with 1994 happening first.

Fear Street 1: In 1994, in the aftermath of a brutal tragedy in Shadyside, Ohio, a group of teens discover that a series of horrifying events that have plagued their town over many years might not be random, and that they may be the next victims.

Fear Street 2: In 1978, Camp Nightwing is divided by the campers and counselors who hail from the of prosperous town of Sunnyvale and the campers and maintenance staffers from the downtrodden town of Shadyside, but when horrors from their towns shared history come alive, they must band together to solve a terrifying mystery before it’s too late.

Fear Street 3: In 1666, a colonial town is gripped by a hysterical witch-hunt that has deadly consequences for centuries to come, and it’s up to teenagers in 1994 to try and finally put an end to their town’s curse, before it’s too late.

The trilogy is going to be released back to back to back, over a three-week period, and I can’t wait to be so scared that I have to sleep with the lights on!

They will each be unique films, but some of the same characters will appear in more than one of the films, and they will all be centered around incidents that happened in Shadyside, Ohio — a village in Belmont County, along the Ohio River.

If you are into movies about camp murders, brutal tragedies, and witch hunts — this series is definitely for you!

You can see the trailer for Fear Street 1 HERE.