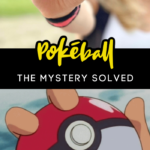 While we all know WHAT a Pokéball is, nobody has been able to figure out how, exactly, they work.

You catch a full size Pokémon, but it somehow fits inside a palm sized Pokéball. Curious!

We all just kind of know that the Pokémon is going to fit inside the Pokéball that we throw, but we have absolutely no idea HOW it works.

I mean, is it like Antonio’s room in Encanto — bigger on the inside?

Maybe it somehow magically reduces the Pokémon into matter — thereby making it fit into the Pokéball.

Perhaps it’s some mystical explanation — one that we don’t get the honor of being privy to.

Up until now, we’ve only been able to make guesses and speculations about how the Pokémon fits into those red, black, and white balls.

With the release of Pokémon Legends: Arceus, we get a bit of insight into the origins of the Pokéball and how it works.

We are returning to the days before trainers really cemented themselves. And we get to see how things like the Poké Ball were invented by the Hisuian people.

At the beginning of Pokémon Legends: Arceus we meet Professor Laventon, who gives us a ton of useful information. The Professor tells us about Hisu, and he also introduces Arceus‘ starter Pokémon.

Side Note: My son was completely nerding out over this.

In the midst of his explanations, Professor Laventon remembers that he needs to tell us about the Pokéball. He tells us to, “Throw these at Pokémon to catch them.”

Professor Laventon seems to sense that we need a bit more information on these Pokéballs. He continues his speech by explaining exactly HOW the Pokémon fits into the Pokéball.

WHAT?!? He says it so matter-of-factly, but in doing so, he clears up a mystery YEARS in the making.

Now, I’ve mentioned already that Pokémon are strange, marvelous creatures. What’s so strange about them you ask? Well, each and every Pokémon is able to shrink itself into a miniscule size! And that’s where Poké Balls come in! Poké Balls. Poké Balls are a recent invention, you see. Throw one of them at a Pokémon, and, why, the Pokémon will shrink down and fit inside the ball, comfy as can be.

Granted, this still leaves us a bit wanting in the world of Poké Ball information. Like, WHY? Why does the Pokéball seem to trigger this shrinking ability? Why haven’t we seen any teeny tiny Pokémon?

Even though we still have MANY questions, this new Pokéball information is HUGE.

What do you think about this new Pokéball revelation? Let us know in the comments.