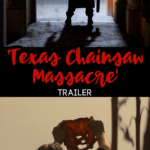 This is one sequel that I am MORE than ready for!

The new ‘Texas Chainsaw Massacre’ takes place after Tobe Hooper’s original 1974 movie, the way it was meant to be.

Who Is In The New ‘Texas Chainsaw Massacre’?

What Is The New ‘Texas Chainsaw Massacre’ About?

I have to be honest, it’s been a hot minute since I’ve watched the original movie, although I have watched it many times during my lifetime.

I think the first movie really hit a nerve when portraying that culture clash between the countryside and the city. Back in the ’70s, the hippies were representing the youth of the city. This time, they’re more like millennial hipsters from Austin who are very entrepreneurial and have a dream of getting away from the city and back to the countryside. They’re trying to gentrify small-town America — and let’s just say they encounter some pushback.

This newest film is directed by David Blue Garcia and the story continues from the first movie, but many many years later.

So before watching this newest movie, disregard every other movie made in the franchise, besides the first one.

It’s basically the same character, who is still alive, [from the original film]. Our take on it was this guy probably disappeared after everything he’s done. You know, how do you catch a guy who has a mask? Once he removes the mask and runs away, it’s very easy for him to hide somewhere. This story will pick it up many, many years after the original story. He’s been in hiding for a long, long time, trying to be a good person. These people arriving in this town are going to awaken the giant.

The new ‘Texas Chainsaw Massacre’ will premiere on Netflix on February 18th, 2022, until then you can get a taste of what’s in store by watching the trailer below.