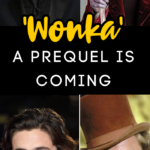 Oompa-Loompa Doopity-Duss, They’ve got another reboot for us!!

Warner Bros. just announced that they have started production on Wonka, a prequel to the most awesomest Roald Dahl novel EVER — Charlie and the Chocolate Factory.

If you haven’t read the book — really — what have you been doing with your life up until now? You HAVE to read it!

Of course, the book has famously been made into TWO movies — the OG that starred Gene Wilder as Willy Wonka, and the Tim Burton version, which starred Johnny Depp as Wonka.

This reboot is going to be about a YOUNG Willy Wonka, who will be portrayed by Timothée Chalamet. You might know Timothée from his time on Royal Pains and Homeland, or from movies like Lady Bird or Call Me By Your Name.

I must say, Timothée fits the role perfectly IMHO. I can totally see him pulling off a younger version of Johnny Depp’s Wonka character!

What Do You Think?

Now, I have no idea if this Wonka is going to be just a bit eccentric — like Gene Wilder’s Wonka, or kooky and a bit “off” — like Depp’s Wonka.

There is ALSO no word on whether we are going to get musical numbers, like all those totally singable songs in the premier version (Willy Wonka and the Chocolate Factory), or like those quirky songs from the Oompa Loompas from Loompaland — which is a terrible place — in Tim Burton’s remake.

According to a the official Warner Bros. press release, this Wonka film will also include the talents of Rowan Atkinson (Mr. Bean), Mathew Baynton (Ghosts), Jim Carter (Downton Abbey), Olivia Colman (The Crown), Sally Hawkins (Paddington), Kobna Holdbrook-Smith (Mary Poppins Returns), and Keegan-Michael Key (He’s been a voice actor in ALL the things. You totally know him!).

Now, you might have guessed from all the actors, but filming on Wonka is being done in the UK, and it is set to open March 17, 2023.

I can’t wait! Is it too early to buy our tickets???