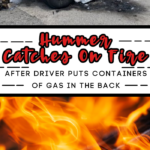 A Hummer in Florida exploded in flames after the driver of the vehicle filled up a couple containers with gasoline.

I don’t know how it has been where YOU are, but the gas “crisis” has been ridiculous here.

I put “crisis” in quotes, because we did this to ourselves.

Yes, there was a cyberattack on the Colonial Pipeline, but it was quickly deescalated, and now it is back up and working.

There was never any real danger of running out of gas — it is the toilet paper shortage of 2020 all over again.

So, this dude — I’m going to go ahead and assume it was a guy — decided to take an extra four gas containers to a Texaco station in Homosassa, Florida, and fill them up with gas — just in case he ran out.

He then swiftly put the gas containers in the back of his big ol’ Hummer, where they caught on fire nearly immediately.

The fire department was able to get there, and put out the fire within 10 minutes, but it doesn’t take long to engulf a car in flames.

The driver refused to be transported for medical treatment.

The Fire Marshal in the state of Florida is investigating the blaze.

It isn’t known what STARTED the blaze — whether it was the Florida heat, whether the driver was smoking, or maybe it was something else altogether.

I’m just going to get on my little soapbox over here, and say, “PEOPLE! Stop the hoarding of things!!”

If we just get what we actually need, and ride out the “storm,” it will all work out to be okay.

Let’s all work together to try and keep resources for everyone — stop with the panic buying!

Have a good day, and thank you.