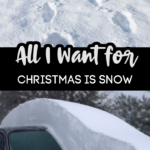 A pearly white Christmas is written on almost everyone’s holiday wishlist, (including mine!)

Considering while there may not be any snowfall this winter depending on where you live, the holiday season is truly not the same without a few snowflakes on the ground, okay, maybe more than just a few.

There’s nothing more nostalgic as an adult than watching the snow fall gently outside while watching from the comfort of your own couch with a generously large mug of hot cocoa steaming into thin air.

Since this winter has been considerably warm especially where I live, sledding, snowboarding, and skating have not been an option this year; it would be similar to the absence of pumpkins during October’s pumpkin picking season and I’d be lying if I didn’t admit that it’s a bit upsetting.

While I do prefer crunchy leaves and winter weather over the summer heat and spring days, lately it’s felt like the spring and summer seasons have not been able to say their official goodbyes, and the two need to promptly to do so.

Although while I’m incredibly grateful to spend the holidays with family and friends (because that’s the most important during Christmastime), a few inches of snow on the ground certainly wouldn’t hurt!

Did you hear Santa?