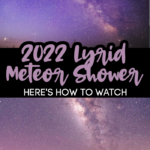 We just had the Paschal Moon, which is April’s full pink moon, now it’s time to look to the skies again for an amazing light show.

The Lyrid meteor shower will peak this week, just in time for Earth Day!

I’m hoping we have a nice clear night for optimal viewing of this magical light show!

The Lyrid shower can feature about 100 meteors per hour sometimes, which is amazing to see.

The Lyrid shower happens every year and are particles shed from Comet 1861 G1 Thatcher.

However, it seems that this year you’ll be able to view 10-20 meteors per hour during the peak time in the Northern Hemisphere.

In the Southern Hemisphere, you should be able to view 1-2 meteors per hour.

The full moon will also interfere with our ability to see many of the meteors since it lights up the sky too much.

The best time to watch would be about an hour before midnight until dawn from April 21st through April 22nd.