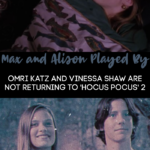 It looks like Max and Allison from Hocus Pocus will not be running amok with the Sanderson Sisters in the upcoming sequel.

While we know that the witches will returning very soon, it’s a bunch of Hocus Pocus to say that the o.g. couple will not be returning to our living room televisions this fall according to Entertainment Weekly.

Max and Allison who are played by Omri Katz and Vinessa Shaw will be excluded from the torments of the Sanderson Sisters and while some people may call that lucky, we sure will miss the characters!

While it wasn’t the original plan to omit the teens, director Anne Fletcher told EW that “it was difficult” to include the two in the new storyline, even in a cameo capacity where she believes it would have been distracting to the new plot.

“We wanted to weave in all of the people that the fans loved, and when you sat back with all the ingredients and story, you’re like, how do we make this work?” Fletcher said. “It was very difficult to try to have them be a part of it, because we did talk about it — painstakingly. You’re trying to stay on track with story, even if they came in as a cameo. People would say, ‘They could be in the background!’ and I’m like, really? You’re going to put the leads of the first movie in the background and be satisfied? You’re not going to be satisfied, you’re going to be angry.”

And as a reminder, aside from the three sisters, Doug Jones who plays Billy Butcherson is the only returning actor for the second movie.

Disney releases Hocus Pocus 2 this September 30th where history repeats itself again with a new group of teens from the town of Salem who resurrect the infamous Sanderson Sisters.

Creating a new reign of terror nearly 30 years later, we wonder what the Sanderson Sisters have up their sleeves with spells this year.