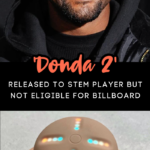 From his bid for President, to his drawn out album releases, to his divorce from Kim, to his beef with Pete Davidson, to his dating Kim K look alikes — it’s kinda hard to keep up.

Remember, he just FINALLY released Donda, after delays, listening parties, and listening concerts. I thought it would NEVER actually be released. But, it was finally released at the end of August.

Now, he has released Donda 2 — which contains the song attached to the controversial claymation Pete Davidson video, “Easy.”

But, the problem — if you can call it a problem — is that Ye has only released this album to Stem Player, which violates Billboard’s merchandise bundle policy. Which means that it can’t be considered for the Billboard charts.

What is Stem Player?

See, the situation here is that Stem Player is Ye’s own portable music player and platform, and that is the ONLY way to listen to Donda 2.

And, that Stem Player doesn’t come cheap. Be prepared to lay down $200 if you want to get this album.

You can look on Spotify, Apple Music, or whatever player you usually use to source your music, but you will not find Ye’s new album.

If you decide to get Ye’s Stem Player, it will come with Donda 2 pre-installed — so I guess that’s a good thing?

It previously came with Donda preinstalled, and now comes with the sequel, Donda 2, onboard (though some disgruntled punters have complained that theirs didn’t).

There is another catch to this Stem Player. You can only get it if you live in the US, UK, EU, Canada, Australia or New Zealand. If you are outside of these areas, you will have to wait.

When we say it’s a portable music player, it’s just that. A disc-type device that you can hold in your hand — complete with lightstrips and buttons.

But, it’s more than that.

Those light strips are controls that let you isolate and manipulate various parts of the song – the vocals, drums, bass and samples. You can also add effects, change the pitch and create loops on the fly, along with four-channel lossless audio mixing. You can then save, playback and download your mixes.

Think of it as sort of a video game way to listen to your music.

Although that sounds pretty cool, there are some drawbacks, and not everyone agrees it is as fantastic as it sounds.

It’s made of a soft material that gives it a tactility that other portable music players lack. This isn’t to everyone’s liking: PC Magazine said it has an “unpleasant fleshy texture”, adding that “it just feels gross”.

It also has only 8GB of memory — so obviously you can’t load your entire listening library to the device.

On the upside, it supports most of the file formats that you would expect and need to download your music: AIFF, FLAC, MP3, WAV, AAC, ALAC and MP4.

So, bottom line — if you want to drop $200 for this Stem Player, you can hear Donda 2. But, don’t expect to be seeing any of the songs on the Billboard’s top 100 list.

As a side note: When Kanye released the OG Donda, he said it would NEVER be on Apple Music. Two months later, it was on Apple Music. So, if you don’t want to drop $200 on a Stem Player, you might just want to wait it out. I’m not saying it will ever appear on Apple Music, but stranger things have happened.