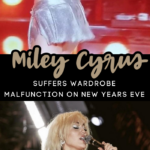 Miley Cyrus certainly knows how to party in the U.S.A on stage!

In case you didn’t see it, Miley recently suffered a wardrobe malfunction that almost left her topless in front of a sea of people just before welcoming in the new year, oh boy!

How Did Miley’s Shirt Come Undone?

Barely hanging on by a thread, and I mean literally, Miley’s shirt almost fell off as she was performing “Party in the U.S.A.” on the night of New Year’s Eve.

I mean just like any piece of clothing, sometimes they rip, tear or plainly fall of our bodies!

Luckily she caught the last thread that saved her from entering the new year nude from the waist up. She then let the band take over her performance until she returned back on stage later rocking a red jacket.

Thinking that the stylish jacket would solve her previous wardrobe mishap, the unbuttoned jacket did everything but that, and almost left the celebrity with another clothing malfunction for the second time in a row that night!

Comedian Pete Davidson sympathized with Miley’s continuous wardrobe malfunctions and decided to lift his shirt in front of the crowd revealing a nipple which of course, the crowd absolutely loved, how sweet!

After her performance on stage, Miley ended the show saying:

“Tonight’s show was all about being flexible, rolling with the punches, and making the best out of even the worst circumstances.” She went on … “Let’s bring that into the New Year with us.”

We can say we don’t disagree agree with you Miley, well said and happy new year everyone!