I’m not a noob to the affects of lice. When I was a little girl my mom once threatened to move me into a cabin by myself if I shared my hat, headband, and/or affection with another lice-carrying classmate. I was a friendly kid, what can I say? So maybe twice a year or so from the time I entered kindergarten, I’d be sent home with that note, “Your daughter has lice. Deal with it. Or else.” Maybe it didn’t read quite like that, but I was five, I couldn’t read yet. All I knew is that as I itched my head and my mom read that note, she’d get this grim look on her face and everything I owned would be washed by midnight. Decades later the tables have turned and my own daughter came home with a similarly worded note and now…I kind of hate my life. 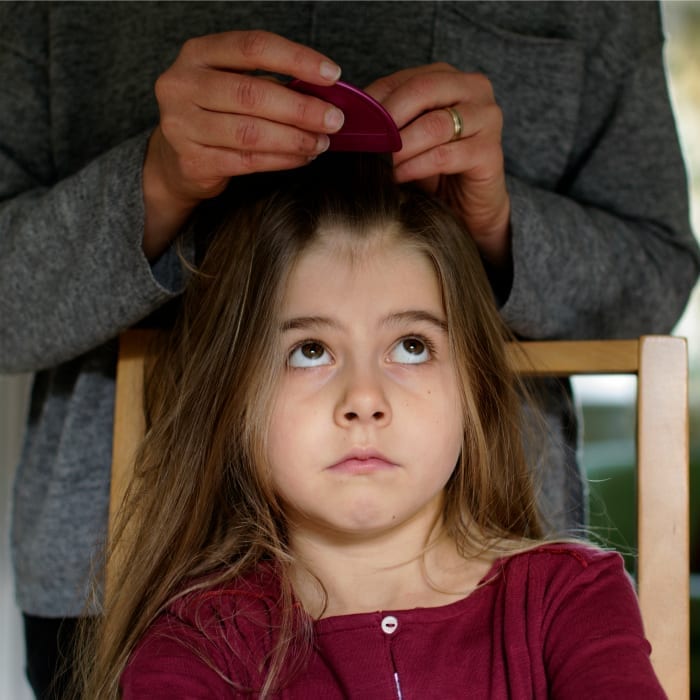 I don’t blame my daughter for this. In fact, in a lot of ways I blame my mom. If she hadn’t always told me she hoped I’d have a daughter just like me someday, we’d probably all be eating meatloaf tonight like I’d planned instead of the cheese sandwiches I whipped up in between trips out to the garage with every cloth object my daughter has ever touched.

Super lice are like lice, but apparently takes illegal steroids or something. They’re impossible to kill off.

And the school didn’t tell me which kind my kid has. 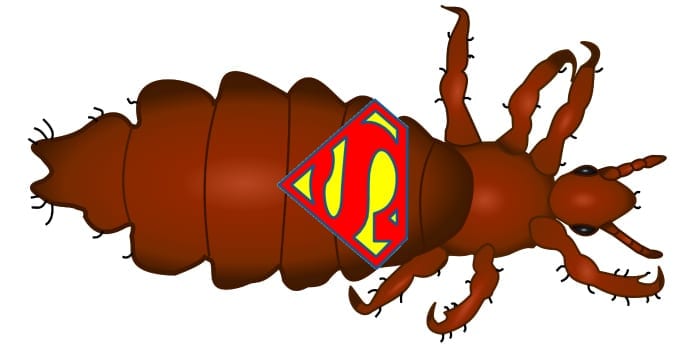 This is my artistic rendering of what it looked like…the real image was too awful to post.

Also, no one agrees on how to treat them, or if they can be treated at all. At this point I’m thinking of maybe just naming them and when my kid asks for a puppy next Christmas or sometime down the road, I’ll remind her that Fluffy, Rex, Fifi, and Spike have been living on her head for years and they’re the only pets she’s going to have until they shuffle off their mortal coils.

Or join a flea circus.

Question: why don’t we hear about flea circuses anymore? Was that just a thing from when I was little? One of those concepts that disappeared over time, like Saturday morning cartoons and prizes in cereal boxes?

I bet Fifi would have been a great acrobat…

The internet said super lice are a lot harder to get rid of. Meaning, that quick trip to the drug store for the box of NIX and that mom walk of shame to the register might not even help. Still, I’m the optimistic sort, so I did it anyway.

Apparently, super lice are resistant to normal forms of liceocide. And no one has found their kryptonite, yet. So I asked my mom for some advice and after she stopped laughing this was her response:

Mom: Wash everything. EVERYTHING. Make the kid sleep outside for the next three days. Tell her that’s her punishment for being sociable.

Me:  I already stripped all the beds, and threw all her clothes in the garage. Bagging stuffed animals now.

Mom: Use mayo on her hair…that suffocates the lice. Or they get fat and die from heart disease…I’ve heard. Check everyone’s hair in the house. If she has it, chances are…you ALL have it.

Me: The internet said to use Dawn dish soap.
Mom: If it’s the super lice, just shave her head. You can’t kill those suckers. Nothing kills those suckers.
Me: Oh god. Do I need to make a waxing appointment?!
Mom: To get your head waxed? Probably…

She then told me about a super icky episode of Dirty Jobs where Mike Rowe goes to work at a professional lice salon. I never knew such a thing existed. After finding the episode and watching it, I still wish I didn’t know about it…

So that’s it then. About two weeks of checking my poor child’s head every single day to make sure we rid ourselves of this.

Luckily, the first treatment of NIX seemed to do the trick. No super lice for us. Which is fantastic because I really wasn’t looking forward to waxing my head…

Have you dealt with a lice outbreak? Any tricks or tips you’d like to share? Tell us about it in the comments below!

My granddaughter frequently shows up to my house with head lice. All of the above ideas are great especially the coconut oil, tea tree oil and apple cider vinegar. I put tea tree oil in bottles of shampoo and conditioner and send home with her. Don't bother with lice combs though. Too small. Go to the pet dept of the store and get a metal flea comb with a rubber grip. Less than $4.00. This has saved my sanity many times.

Worked at an elementary school in the 80's, concerned about lice from the little ones that loved to hug you, also had boys in school at this time. I asked office personnel how they dealt with it and was told to use hair product & spray daily and no worries, I used it on myself & boys and NEVER had a problem!! Also blow drying, I did it all and am happy to say it worked! Had a granddaughter who came home with the dreaded bugs, they got rid of them and she uses hair products and no problem. Good Luck! Who can afford $500.00???

Ah , I rember those days. My kids had the super L. So I used nix. Did nothing, used another brand no luck there either. So internet limited as it was here I come. Off to the dollar store. Bought the biggest conditioner bottle I could, and disposable shower caps. Came home , half a bottle on each one of them, 4-5 hours later , rinse, comb out, and for the next 3 months, bought Tea Tree oil shampoo. And gone they went.

A flat iron and twa tree oil. They can't live thru the heat so flat iron on the regular. Abd they do not like tea tree oil so use it