Nerds Candy Corn Is Coming To Sweeten Our Lives This Halloween 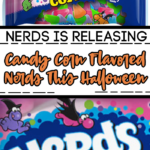 Ferrara Candy Company, aka the company that owns Nerds candy is releasing a completely new flavor specifically designed for Halloween this year.

To jog your memory, rumors surfaced that Skittles might be releasing a new zombie candy, Mountain Dew’s mystery flavor has been leaked and now, Nerds is releasing a new Halloween themed candy.

Exactly the opposite of the candy corn you either love or hate, this new Nerds bag claiming to be candy corn is neither white, yellow or orange.

In fact, each crunchy yet chewy piece is hard on the outside similar to a regular Nerds bite but very soft in the inside and specifically, with a new mellowcreme center.

We assume that the new triangular candy has an inspired marshmallow flavor considering the description quotes “mellowcreme center.”

Each Nerds Candy Corn is uniquely decorated in solid colors including orange, green, blue, pink, and purple which means there’s no way of mixing up these candy corn pieces for the OG ones.

So far, the 8-ounce bag featuring Nerds characters dressed up like witches and bats have been listed on Candy Warehouse with minimal details; so for now, it’s a waiting game until the official announcement of the new Halloween candy arrival.

1 shares
Home Depot Is Selling The Cutest Hanging Ceramic Planters To Place Your Succulents In
← Previous
People Are Roasting Cinnamon Rolls Over A Campfire And It's Pure Genius
Next →
Click here to cancel reply.