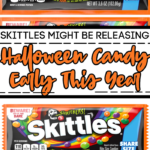 There’s no such thing as celebrating for Halloween too early, at least according to Skittles.

As the start of summer is right around the corner, Skittles has created a Halloween candy that will make you want to put away the beach hat and exchange it for a witches one instead

There are currently six more months until we reach spooky season, but Skittles has given us a sneak peak on their new zombie candy.

Introducing Skittles Shriekers, a creepy candy that will make you shriek like a zombie because some of these candies are very sour, at least according to the packaging!

The new flavors include Spine-Tingling Tangerine, Ghoulish Green Apple, Rattled Raspberry, Citrus Scream, and a Shocking Lime but the catch is, there’s no telling on which ones are sour until you try every flavor in the pack.

Even though the Halloween themed Skittles Shriekers bag was posted recently on Meijer’s website, there’s no official release date yet, but we’re assuming the spooky candy will be released sooner, rather than later.

1 shares
Netflix Has Just Confirmed Season 3 Of 'You' Is Coming This Year
← Previous
Hilary Duff Will Be Starring In The 'How I Met Your Mother' Sequel Series
Next →
Click here to cancel reply.