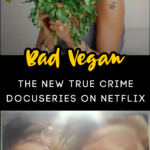 I am OBSESSED with all the True Crime documentaries on Netflix, and there’s a new one on the horizon that’s looking to be just as good as all the others!

At face value, you might think this is just another boring documentary — but you would be oh-so-wrong!!

If you liked The Tinder Swindler, this one is going to be right up your alley.

Sarma Melngailis was living a pretty good life. She had reached vegan celebrity statues with her restaurant, Pure Food and Wine, in New York.

But, things got weird. Really weird.

See, in 2011 Sarma got sucked into the world of social media, and got involved with a man on Twitter named Shane Fox.

Get this — Shane Fox somehow convinced Sarma Melngailis that he could help expand her empire. And — wait for it — he said he could make her and her dog immortal.

Sarma Melngailis Believed That Shane Fox Could Make Her Immortal

Yes. You read that right. Sarma thought Shane had some weird a** magic abilities that would make her and her dog immortal.

All she had to do? Every single thing that Shane told her to do.

This stuff can’t even be made up.

Now, Fox and Melngailis ended up getting married.

They also stole almost $2 million from Sarma’s restaurant and its staff before they decided to run from the law.

The couple were caught when they randomly decided to hide out in Pigeon Forge, Tennessee.

But it was HOW they were caught that you aren’t going to believe.

This vegan restaurateur and her husband were found when they ordered a pizza from Domino’s!

I can’t wait until this documentary drops, and we get to see the way this story played out!!

Look for this four-part docu-series to hit Netflix on March 16th.

You can see the trailer for Bad Vegan: Fame. Fraud. Fugitives. below.