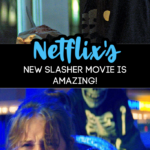 A ‘Fear Street’ trilogy has begun and it is PHENOMINAL. And that says a lot coming from someone who doesn’t really do slasher films or horror movies whatsoever.

Fear Street: 1994 is on Netflix now and I watched it as fast as it could. It was suspenseful from the second I turned it on…even to the post credits. It also kind of leaves you hanging for the next part of the series!

I am truly shocked at how much I liked this film. Granted, it doesn’t end well for any of the characters…but I’m not going to say anything beyond that. You really need to go watch it for yourself!

This has gotten me all sorts of amped up for the spooky season and I’m already pacing, waiting for the next part of the trilogy to come out. You really need to give this a try even if you aren’t a fan of the horror genre!

It even has a romance in it to make it slightly adorable. And some comedy. A little bit of everything to be honest. But I have to say, this is so well made, I am STUNNED. I can’t believe I can say that I can’t wait to watch the next upcoming slasher movie (who am I?)

This one gets a giant thumbs up from me. I highly suggest you give it a try yourself. There’s only a couple parts you’d have to cover your eyes…