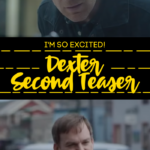 I’m a ‘Dexter’ super fan, no joke, I have rewatched this series more than anyone that I know.

Recently I posted a teaser that showed Dexter looking through a window and in the background, you could see a victim on a table waiting.

Well, I got to see another teaser of my favorite serial killer today and of course, I had to share it with all of you as well.

I am so looking forward to this season to make things right, I was left saddened by the way the original series ended.

And while it doesn’t seem like things are going to be the way I wanted them to be, I still have hope.

Dexter needs to reunite with Hannah McKay and Harrison, this is what I want.

I still have hope that this will end that way, you know Harrison fighting the same dark passenger that his dad did and Dexter coming to teach him the “code”.

In this new teaser, Dexter looks to be a super popular person in his new town, everyone saying hello to great him on the streets.

Then he walks by a window that has a knife display and you see that twinkle of craving in his face.

In this new season, Dexter is in upstate New York and works at Fred’s Fish & Game hiding behind a new identity with the name Jim Lindsay.

Interesting since the author of the Dexter books is named Jeff Lindsay, Yes, I’ve read those too!

There are rumors that Debra will take over for Harry as Dexters dark passenger and I’m ok with that!

The Dexter revival will likely arrive in late 2021.