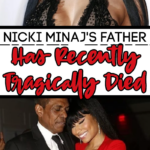 Robert Maraj was tragically killed alongside a road late last Friday and our hearts are with the Minaj family today with this horrifying news.

Robert Maraj was only 64 years old when he was struck by a hit-and-run driver on Long Island when he was walking on the side of the road at 6:15 p.m. in Mineola, New York.

According to a neighbor who lives directly in front of where the incident happened, spoke to CBS New York and stated,

“We just saw a jacket ripped open, cut open, trying to make sure the man had a pulse,” she said to CBS New York. “All I hoped for was the person to have a pulse and survive. I’m speechless. I don’t know what to say.”

So far, Nicki Minaj has not commented on the tragedy of her father’s death.

We send our deepest condolences to the Minaj family including friends who were close Mr. Maraj as well.

50shares
JoJo Siwa Celebrated Her First Valentine's Day With Her New Girlfriend And The Pictures Are Adorable
← Previous
Here's A List of Human Foods That Are Dangerous For Your Dog To Eat
Next →
Click here to cancel reply.