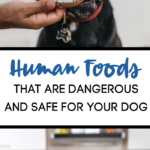 My dog was a BAD BOY Saturday night. He snuck into my room, got into a box full of Girl Scout cookies, and ate more than half the box.

I’m not saying he ate half a PACKAGE of cookies. We had 6 packages of Girl Scout cookies in a random shipping box, and he got into the box.

Apparently he highly approves of the Lemonades and the Toast Yays. They are gone.

His sneaky puppy munchin ways got me thinking — and a bit panicked, to be honest. Are cookies safe for dogs to eat?

I took to the internet, like we do, and spent a good hour on the American Kennel Club website, the ASPCA website, and the dog version of WebMD — did you even know there was a dog version?!?

Get your printer ready, because I’m about to give you a list of treats you CAN and CAN’T give your dog.

Foods That Are Okay For Dogs To Eat

Bread: Bread is okay for dogs to eat, but bread is full of empty calorie carbohydrates. Just like with humans, if dogs eat too much bread, they can really pack on the weight. Give bread to them sparingly.

Keep in mind, if you are going to give bread to dogs, it needs to be PLAIN. No spices, raisins, cinnamon, or anything else that we might like, but can be a harm to dogs.

Cashews: Most nuts are a no-no for doggos. But, cashews are okay in very small increments. They contain a ton of nutrients that are good for a dog, but they also have tons of fat, which can lead to puppy obesity.

Remember, if you decide to give your dogs a small bit of cashews for a treat, make sure they are UNsalted.

Be careful. Like so much else, cheese can be high in fat. It can make your doggo a little bit fluffy in the fat department. Give it sparingly.

Coconut: Coconuts are a bit complicated. Coconut milk and coconut oil can be great in small amounts.

It can “help with bad breath and clearing up skin conditions like hot spots, flea allergies, and itchy skin. Coconut milk and coconut oil are safe for dogs too.”

BUT, beware! Coconut does contain oils that can make your dog’s tummy upset. You may also have to deal with loose stools or diarrhea. No Thank You!!

Also, you want to BE SURE to keep the outer husk of the coconut away from your fur baby. It can be a choking hazard.

Corn: Most of your standard dog foods are made with corn. So yes, it is fine for your pup to eat corn.

BUT, watch out for that corn husk. It can cause digestive issues, including intestinal blockages. Make sure you cut that corn off the cob for your dogo.

Eggs: Of course! It is okay for your pet to eat eggs — as long as they are COOKED eggs.

However, eating raw egg whites can contribute to biotin deficiency, so be sure to cook the eggs all the way through before giving them to your pet.

Fish: It may come as no surprise, but just like with fish for humans, it is safe for doggos to eat.

While fish is full of protein and awesome vitamins, they are also full of teeny tiny bones.

Make sure you get all the bones out of the fish, so your fur baby doesn’t choke.

Never feed your dog uncooked or undercooked fish, only fully cooked and cooled, and limit your dog’s fish intake to no more than twice a week.

Ham: Yes, ham is okay for dogs to eat. but it isn’t the BEST meat for them. It is full of fat and sodium, and that obviously isn’t the best.

You can most definitely give it to them as a treat, but do so sparingly.

Honey: Honey is very good for pups. Not only does it have tons of vitamins that are great for their bodies, you can use honey topically to treat burns and minor cuts.

Milk: Like coconuts, milk can be tricky. Dogs LOVE milk, and it can be okay for them. BUT, so many dogs are lactose-intolerant, and can therefore get diarrhea from milk.

Maybe try it out in small amounts to see if your dog can take it.

Peanut butter: Peanut butter is most definitely okay for dogs. You can find it in so many of their goodies and treats — and they LOVE it!!

Raw, unsalted peanut butter is the healthiest option. Read the label carefully to be sure the peanut butter does not contain xylitol, a sugar substitute that can be toxic to dogs.

Peanuts: Like cashews, peanuts are a nut that is okay for your fur baby to eat. Make sure you give these treats in moderation, and try to avoid the super-salty variety.

Popcorn: This might be surprising, but popcorn is okay for dogs to eat. Yes, as long as the popcorn is unsalted and unbuttered, it can be a fun treat for your dog.

Just be sure that you don’t give them unpopped kernels, because the pup can choke, and we don’t want that!

Pork: Aren’t ham and pork the same things? I guess they are a bit different, because pork is more digestible than ham.

(Pork is) packed with amino acids, and it contains more calories per pound than other meats. Pork also may be less likely to cause an allergic reaction in some pets compared to other proteins.

Quinoa: Quinoa is like corn. It can be — and IS — used in dog food. It is full of all the good things that can keep a doggy healthy and happy.

Salmon: Like we have already touched on, fish can be good for dogs, and salmon is one of the best.

Remember, you should always cook salmon all the way to get all those pesky fishy parasites out.

Shrimp: Little shrimpies are fine for dogs, but there are a few things you need to remember.

They may be low in calories, fat, and carbs, but they need to be FULLY cooked with all the extras removed: the head, the tail, and all their little legs.

Tuna: Doggos love the tuna. Whether it’s a bit of meat from the fish or the juice from a can of tuna, dogs go crazy for the taste.

Yes, we have previously told you that fish is okay for doggies, but you need to be careful of all the sodium and the small amount of mercury.

A little bit of canned tuna and tuna juice here and there is fine — prepared only in water, not oil — as long as it doesn’t contain any spices.

Turkey: Yes, yes, yes. Dogs can enjoy Thanksgiving along with the rest of the family. As long as you give him / her the pieces of meat that don’t have extra salt of spice, everything is good.

Make sure to remove all the bones before you give the doggo turkey. You would hate for the dog to choke or perf a bowel.

Wheat/grains: It is totally fine for doggies to have wheat or grains. They are a great source of “protein, essential fatty acids, and fiber.”

Yogurt: Some puppers have trouble with dairy, but in general, plain yogurt is fine for dogs.

In fact, it might be a good, fun treat for your pup, and the probiotics in the yogurts can help their digestive system.

Foods That Are NOT Okay For Dogs To Eat

Alcohol: Repeat after me — DO NOT GIVE YOUR DOG ALCOHOL!!

Not just alcoholic beverages, but you also want to avoid foods that contain alcohol.

Alcohol can cause vomiting, diarrhea, decreased coordination, central nervous system depression, difficulty breathing, tremors, abnormal blood acidity, coma and even death. Under no circumstances should your pet be given any alcohol.

Almonds: Almonds aren’t toxic for doggies, but they are the PERFECT size to get stuck in a dog’s esophagus.

Just say no to almonds!

Chocolate: Say it with me — dogs should NEVER eat chocolate. You’ve probably heard this a million times, but didn’t know if it was true or not.

Chocolate contains toxic substances called methylxanthines, which are stimulants that stop a dog’s metabolic process. Even just a little bit of chocolate, especially dark chocolate, can cause diarrhea and vomiting. A large amount can cause seizures, irregular heart function, and even death.

Now, 100 times out of 100, if you have chocolate within reach, the dog will go for it. Keep it AWAY from anywhere your dog might be able to reach.

Cinnamon: Cinnamon probably wouldn’t be detrimental to your dog’s health — like chocolate is — but it can be an irritant.

Just like with humans, if they breathe in the cinnamon dust, it can cause troubles breathing.

Citrus: Small pieces of the fruit probably won’t do much harm, but other parts of the fruit — like the peels, leaves, and seeds — contain more oils and those can be dangerous to doggos.

Garlic: This was eye opening for me. I had always heard that if a dog eats garlic, it will keep fleas away.

No, dogs shouldn’t eat garlic — (it) is part of the Allium family, and it is five times more toxic to dogs than the rest of the Allium plants. Garlic can create anemia in dogs, causing side effects such as pale gums, elevated heart rate, weakness, and collapse.

Grapes and Raisins: I know from experience that grapes and raisins are poisonous to dogs. they can cause kidney failure.

PLEASE don’t feed your dogs grapes or raisins as treats!

Ice cream: You might be very tempted to share this tasty treat with your pup, but fight the urge.

Ice cream is super high in sugar, and it should be avoided.

These are some of the most poisonous foods for dogs. Macadamia nuts, part of the Protaceae family, can cause vomiting, increased body temperature, inability to walk, and lethargy. Even worse, they can affect the nervous system. Never feed your dog macadamia nuts.

Onions: The onion is kin to the garlic. Like garlic, these vegetables — yes, they are considered vegetables — can cause anemia in dogs.

Raw & Undercooked Meat: Just like humans, dogs can get Salmonella and E. coli from raw or undercooked meats.

Remember to always cook that meat before you give it to your dog.

Salt and Salty Snack Foods: Just say “No.” Large amounts of salt can cause problems with thirst and going to the bathroom.

Even larger amounts can lead to sodium ion poisoning.

Signs that your pet may have eaten too many salty foods include vomiting, diarrhea, depression, tremors, elevated body temperature, seizures and even death.

Xylitol: Xylitol is a popular sweetener used in baked goods, gum, among other things.

It can cause insulin release in most species, which can lead to liver failure. The increase in insulin leads to hypoglycemia (lowered sugar levels).

Yeast Dough: Yeast produces ethanol, which is a type of alcohol. As we know, dogs should never have alcohol.

Rising dough can also cause bloating in the doggo, and can even make their stomach twist — which is extremely painful and life threatening.

35shares
Nicki Minaj's Father Has Been Killed By A Hit And Run
← Previous
You Can Get A Glow In The Dark Oogie Boogie Face Mask And It's So Cool, I Can't Believe My Eyes!
Next →
Click here to cancel reply.