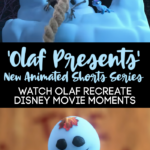 Disney+ just relased a trailer for a new series of animated shorts featuring one of my favorite Disney characters, Olaf!

Olaf and I have go way back, in fact I learned rigging with Olaf at Disney Animation Studios.

I even learned how to do a voiceover… I sucked at the voiceover, somewhere floating around the internet is evidence of that.

‘Olaf Presents’ starring Josh Gad is a series where Olaf recreates moments from 5 different Disney movie classics, in a way that only Olaf can!

In the new series, Olaf will retell moments from the following Disney movies:

The charismatic and versatile Olaf demonstrates his theatrical flair, taking on such iconic roles as a mermaid, a genie, a lion king (and most of the parts in between), as he entertains Arendelle with his delightful abbreviated versions of these beloved tales.

This isn’t Olaf’s first rodeo with animated shorts on Disney+, there was also ‘Olaf’s Frozen Adventure’ and ‘Once Upon A Snowman’.

It’s being released as part of the Disney + Day celebrations and there will also be a new short from Pixar called ‘Ciao Alberto with the characters from ‘Luca’!

You’ll be able to watch ‘Olaf Presents’ with your family on Disney+ on November 12th, 2021, enjoy the trailer below.