Some Royal Caribbean Cruises Are Resuming In June

Categories Happy Happy, Joy Joy, Heavy Handed Advice, Hot Off The Press, Pop Goes The Culture, These Things Are Better Than Your Things 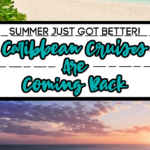 I’ve never been on a cruise, it’s always been one of those bucket list items for me though. For me, it’s a cruise to Alaska, that would be the ultimate cruise!

I know the majority of you want the sand and sun of the Caribbean though, so this is great news! In June two Royal Caribbean cruises will be back to cruising the waters!

However, there are requirements. Passengers that are 18 and older must be fully vaccinated and everyone must test negative for Covid-19 72 hours before boarding a ship.

That’s sad, because not everyone can get the vaccination, including me.

The Royal Caribbean Group’s namesake line will start cruising the waters again just one week later. They will leave from Nassau, then hit the Bahamas on the Adventure of the Seas.

With the Caribbean such a popular destination, “It’s not entirely surprising to see both Celebrity and Royal Caribbean finding a way to return to the region. But it is massive news for the cruise industry, and for the Caribbean itself.

The CDC stopped cruise ship operations for U.S. waters in March of last year. Now the crews can get back to work, but they too must be fully vaccinated.

Cruises to Alaska will be on hold a bit longer though. The Canadian government has banned cruise ships carrying more than 100 passengers.

That ban is in effect until February of 2022 and prevents many ships from being able to visit Alaska.

2 shares
Baileys Has A New Piña Colada Flavor Just In Time For Summer And I Need It Now!
← Previous
'Chick-Fil-A Bowls' Are The Hot New Food Trend and I'm Not Even Mad
Next →
Click here to cancel reply.