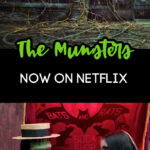 They just dropped a new trailer for the Rob Zombie reboot of The Munsters, and it looks pretty good.

I don’t know what this trend is — the one where all the old shows are getting rebooted — but I love it!!

We’ve already been teased with reboots like Interview With a Vampire, Sex and the City, iCarly, The Rugrats, The Addams Family, and The Lost Boys.

NOW, Rob Zombie is bringing us the reboot that we didn’t even realize we wanted.

In fact, a lot of people are loving his take on the classic.

The Munsters just dropped onto Netflix, and I’m hella excited to see it reimagined.

This new, modern take on that lovable Frankenstein-esque family is coming from the imagination of Rob Zombie.

Not only is he that wicked singer from the 90s, he’s also had his hands in several Halloween reboots and crazy cool — slightly scary — projects through the years.

While he usually leans on the horror genre, this time he is bringing us a bit of light-hearted monster fun.

This is either going to be REALLY good, or it’s gonna suck hardcore. LOL!!

He’ll definitely be paying homage to the original — we get to hear that classic Munsters theme song. But, this time around, we’re getting some fresh talent to make us smile.

We get a treat, because Rob Zombie’s wife — Sheri Moon Zombie — is going to be playing Lily Munster in this wicked fun reboot.

It gets even better. Cassandra Peterson, better known as Elvira, Mistress of the Dark, is going to be making a cameo in the film. I can’t freaking wait!

Another horror icon joining this cast of spooky fun characters is Dee Wallace — from The Howling and Cujo.

Incidentally, she was also the mom in E.T.

You can see the new trailer for The Munsters HERE.

And, you can go to Netflix to stream the movie NOW.