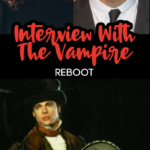 When a super iconic film gets a reboot, I am ALWAYS worried it’s going to get ruined somehow. So here’s to hoping that is not the case for Interview With The Vampire!

AMC bought out the rights to to Anne Rice’s Vampire Chronicles series in 2020, which included Interview With The Vampire, and now is planning to release the newest adaptation of the book to film in 2022!

So now the biggest question is who plans to fill in the shoes of these iconic roles? Don’t worry, we’re here to spill those beans!

I feel horrible saying this, but I had to look up this actor because he didn’t look familiar to me. This Australian actor is filling the giant shoes of Tom Cruise in this role and I don’t know if he’s fitting for the role because he’s completely unfamiliar to me!

I immediately recognized this face from Game of Thrones, but outside of that, I don’t think I’ve seen him in anything. He will be taking on the original role that Brad Pitt played.

Kirsten Dunst is being replaced by Bailey Bass, an up and coming actress set to be in the newest Avatar movie coming up. She finishes out the newest replacement of the main trio of the movie.

The other role confirmed is Kalyne Coleman as Grace de Pointe du Lac, a role that was not in the original film, but from the book. Other characters are still waiting to be cast. What are your thoughts on the current lineup?