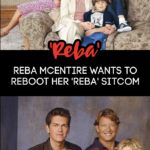 Reba McEntire wants to bring back her Reba sitcom, and I’m waiving 2 emphatic hands in the air!

I wasn’t a huge Reba fan the first time the show hit the airwaves. It’s not that I didn’t like it. It’s more that I never watched it.

We are in the day and age of streaming services, however. Thanks to HULU, Reba is one show that is now in our rotation on the regular.

It is one of the few shows that I can leave on with the kids in the room — if you know what I mean.

So, when I heard the news that Reba McEntire is working to bring the Reba sitcom back to the airwaves, I did a little happy dance right on the spot.

In a recent interview with The Bobby Bones Show, Reba let the news drop that she’s been working on getting a reboot of the sitcom in the entertainment pipeline.

We’ve really been trying hard to do a reboot of the Reba show. I really want to work with the people that I got to work with during that six and a half years.

When we left Reba in the series finale, Cheyenne and Van had moved back in with Reba after a fire at their new house — that Van had started. Cheyenne was pregnant, and expecting a little boy. Brock had gone back to being a dentist. And, after 6 1/2 years, Reba finally confessed the fact that Barbra Jean was her best friend.

I am so excited that we might get more of the story!! We might get to find out what happened after the cameras stopped rolling.

What do you think of a Reba reboot?