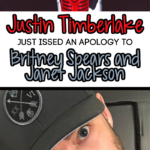 And while he was at it, he apologized to Janet Jackson for the incidents surrounding “Nipplegate 2004,” where he accidentally exposed her breast while they were performing at the Super Bowl Halftime Show.

The note from Timberlake was posted on his Instagram account, and it is so very well thought out and eloquently stated.

The dude is just a human being, afterall, but he is stuck in the middle of this weird situation called fame and the public eye.

“I’ve seen the messages, tags, comments, and concerns and I want to respond,” he starts his Instagram message.

I am deeply sorry for the times in my life where my actions contributed to the problem, where I spoke out of turn, or did not speak up for what was right.

I mean, let’s think about this. I’m not making excuses for him, as what he did or did not do might have caused major damage in a person’s life.

BUT, he was so young at the time. Who HASN’T made stupid decisions in their younger years??

He was only 23 years old when “Nipplegate” happened, and he was even younger when he was with Britney Spears, and subsequenlty released ‘Cry Me a River,’ which had a Britney look alike in the video.

He also had to deal with these situations under the microscope of fame and paparazzi.

Now, once again, I am not trying to apologize for him, but I am SO glad I didn’t have to deal so publicly with my actions in my early 20s!!

I understand that I fell short in these moments and in many others and benefited from a system that condones misogyny and racism.

I specifically want to apologize to Britney Spears and Janet Jackson both individually, because I care for and respect these women and I know I failed.

Now, it takes GUTS sometimes to stand up for what is right, and I really think he is doing the right thing, here.

I also feel compelled to respond, in part, because this is a larger conversation that I wholeheartedly want to be part of and grow from…

819 shares
Airheads Is Releasing Candy Stuffed Ropes That Come In Five Different Flavors
← Previous
You Can Get New Kool-Aid Candy Dippers And I Feel Like A Kid Again!
Next →
Click here to cancel reply.