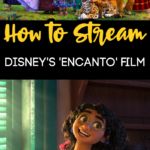 Disney’s latest animated musical has finally released to its streaming platform for all to watch at the comfort of their home!

While you can’t beat the big box theaters movie theatre buttered popcorn, watching a movie from the comfort of your own couch is a close second.

If you haven’t seen the magical film yet, Disney’s new movie features a girl in Colombia who faces frustration because she is the only member of her family who sadly, does not have magical powers like the rest of her blood relatives.

An entire family that’s consumed of magical powers with one who we assume can even talk to animals, excludes one sibling named Mirabel who does not have the ability of making flowers bloom, super strength or making inanimate objects move.

Encanto releases today on Disney+ as an early Christmas gift from the big mouse!