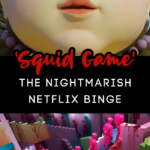 What in the actual, metaphorical, and hypothetical hell do y’all have me watching?

I’d been hearing all this hype about Squid Game — the dystopian Netflix Korean hit series that EVERYONE is talking about. “You HAVE to watch this crazy show,” one of my friends said — I am now pretty positive that they may hate me.

The first time I ever heard of Squid Game was when I got lost down a TikTok rabbit hole, as one does. I had NO idea what the heck I was watching, but apparently the entire world of TikTok is obsessed.

There were all these recreated scenes that included a giant, creepy AF doll, a terrifying Korean kids song, what appeared to be a strange game of Red Light Green Light, and people trying their hand at making some sticky brown substance that seemed to harden into a candy that could be cracked into shapes.

Then I came across several articles that talked about this new Korean series on Netflix, which seemed to coincide with all the TikToks I had seen.

Now, I wouldn’t normally dive head first into a foreign TV series. Subtitles and me don’t get along — you have to pay too much attention. But then, I found out you could watch it dubbed into English, so I decided to give it a try.

WHY?!? Why are y’all watching this show that will henceforth give me nightmares?

So, if you don’t know the premise, it’s pretty simple — in theory.

There is a gambler (Seong Gi-hun) who is down on his luck and needs cash. He meets a mystery man, who tells him that he has a way to fix Gi-hun’s problems. He invites him to a secret venue, where there are another 455 people that appear to be in the same state of destitution that Seong Gi-hun finds himself.

All these people learn that they have the opportunity to make –what amounts to — $38.7 million. All they have to do is play a series of kids’ games without getting eliminated. If they make it to the end, they win the money.

But, what they don’t know is that to be “eliminated” means that they will LITERALLY be eliminated — killed.

They have the opportunity to leave, once they find out the premise of the games. And, some of them actually do, but they are drawn in — enticed if you will — by that damn money.

I kept watching, because there is kind of a morbid curiosity that draws you in. But, I legit will have problems sleeping. Arena-style mass murder is not my idea of a quaint Friday night TV binge.

If you want to know what the hype is all about, and you will inevitably be curious, I will tell you DO NOT WATCH this show with your kids — it will scar them for life.

You can catch all nine episodes of Squid Game, which is quickly becoming more popular than Bridgerton EVER was, on Netflix. (But, Bridgerton was MUCH easier to watch!!)

I’m just going to go on record as saying DON’T DO IT, but there is no stopping the curious masses that are attracted to this Korean dystopian nightmare. So, watch at your own risk.