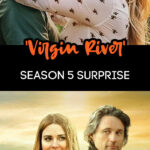 The Virgin River cast just dropped a little bomb about Season 5, and I can’t wait.

Okay. Why didn’t anyone tell me that I HAD to watch Virgin River?!?

I started watching on a whim, and it turned into a 6-day binge marathon.

Sure, Season 4 just dropped on Netflix, but we are already thinking about Season 5.

There Are Virgin River Spoilers Ahead. You Have Been Warned.

So much happened in Season 4. I’m still trying to wrap my head around it.

We now officially know that Jack’s the father to Mel’s unborn daughter.

I mean, we knew it was headed that way, but THANK GOD it turned out how we hoped, right?!?

Speaking of our favorite couple, Jack and Mel got engaged before finding out the paternity. Awww. So sweet! It just proves that they are truly committed to each other.

And, then there’s Charmaine. Whoa! We found out that Jack ISN’T the father of her twins. But, who the heck?

Paige and Christopher. I can’t with the rollercoaster. Do you think Vince is dead?

At least we finally know who shot Jack, and how it went down.

Will There Be A Season 5 Of Virgin River?

Of course!! Too much happened to just leave us hanging.

We knew it was coming. Season 5 was given the okay at the same time Season 4 was confirmed.

In fact, production has already started on the next season of Virgin River. Gah!!

Jack’s back! Day 1 of shooting #virginriver Season 5 – feels good to slip back into jacks boots.

When Will Season 5 Of Virgin River Come Out?

Unfortunately, we haven’t yet been given a date for the Season 5 premier.

BUT, previous seasons of the show have dropped in the summer.

SO, we can ASSUME that Season 5 will premier sometime during the summer of 2023.

It’s just as bad as waiting for the premier of The Handmaid’s Tale. They give us this awesome season, with a giant cliffhanger, and then make us wait FOREVER before we get some resolution.

We have now started production on SEASON 5! Also, please meet our lovely new Show-runner for S5 @patrickseansmith (pictured here.) We can’t WAIT for you to see what we have in store.

What Will Season 5 Of Virgin River Be About?

Patrick Sean Smith is picking up as showrunner for Season 5 of Virgin River, and he has given us just a small taste — although a good one — of what’s to come in Season 5.

Season 5 picks up right after season 4. There’s no time jump between four and five

At least there’s that! I hate it when there is a big finale, and then the next season jumps forward. It’s like, “Wait a minute!!”

Does the cast know what is going to happen?

Well, you know, I don’t know a ton about it, because we don’t get the scripts until a couple of weeks before we shoot them.

There will be another big event, which I can’t say what it is, but that does seem to be a theme of every season where we do have one big thing where everybody comes together, and it’s very exciting. I wish I could say more about it, but it’s a more important event than what we’ve had in the past of just having a gathering.