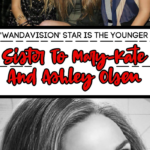 The actress who plays Wanda in the hit TV show, WandaVision is the little sister of two famous twins!

You may have thought Wanda looked vaguely familiar and that’s because Mary-Kate and Ashley Olsen have a little sister and her name is Elizabeth Olsen!

Mary-Kate and Ashley aren’t the only members in the Olsen family who are famous, Elizabeth has also starred in a handful of Avengers movies, Godzilla and many other films that you can’t count on two hands!

The famous twins from the hit series Full House looked like they were role models to Elizabeth since the baby of the family has followed in their footsteps.

Currently, Twitter is in an uproar over the fact that some people didn’t know WandaVision star Elizabeth Olsen is related to Mary-Kate and Ashley!

After Disney+ recently dropped the seventh episode of WandaVision, many people raced to Elizabeth’s wikipedia page to come to the realization that she is indeed, an Olsen sister.

With that being said, let’s give credit to Ms. Elizabeth Olsen because she has worked incredibly hard to distance herself from her twin sisters in her acting career.

“Nepotism is a thing and I’m very aware of it,” Elizabeth told Grazia last week. “And of course, I’ve always wanted to do it alone.”

To be honest, this whole realization of Elizabeth Olsen being related to Mary-Kate and Ashely is shocking because they are crazy similar in their facial features and let’s not forget about the handful of photos the trio has on the Internet pictured together…