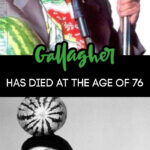 Best known for smashing watermelons with a sledgehammer onto a crowd covered in rain gear during his comedy shows, Gallagher has died at the age of 76.

According to Fox News, his longtime manager confirmed the news earlier this morning.

After a short health battle, Gallagher, born Leo Gallagher, succumbed to his ailments and passed away surrounded by his family in Palm Springs, California.

He had previously suffered numerous heart attacks, something he and David Letterman talked about on an appearance a few years back.

Gallagher became a household name in 1980 with his comedy special “An Uncensored Evening’, which was directed by Mike Nesmith of The Monkees fame. This was the first comedy stand up special ever to air on cable television.

Gallagher rose to fame from a clever bit he did with a hand-made sledgehammer he dubbed the ‘Sledge-O-Matic’, at which the end of the bit he would smash food onstage and spray it into the audience.

Our thoughts go out to his friends and family at this tough time.